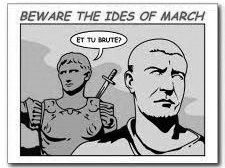 Ides, a Roman terminology, is the middle of the month, according to some alignment with the moon. The Ides in March, May, July and October are on the fifteenth. In other months, the Ides lands on the thirteenth. In Caesar’s time, the Ides of March was a celebration day. It was meant to honor Mars, the Roman god of war, in the month named after him.

Most know “Et tu, Brute,” the famous quote from William Shakespeare’s depiction of the assassination of Julius Caesar on the Ides of March. It was an unlucky day for Caesar. He was stabbed numerous times as he was surrounded by disgruntled senators unhappy that Caesar had declared himself “Dictator for Life.”

Decimus Junius Brutus Albinus, a protégé of Caesar, is often confused with Marcus Junius Brutus. Both were members of the stabbing party. Caesar was not planning to attend the senate meeting due to his wife’s forebodings. However, Decimus convinced Caesar to attend, even escorting him there, neatly circumventing a message from Marc Antony to stay away. In the ensuing melee, Decimus stabbed Caesar in the groin. Although Caesar never said, “Et tu, Brute,” it would have been to Decimus he would have spoken, as Decimus was an heir in Caesar’s will.

The other Brutus, Marcus Junius Brutus, had opposed Caesar earlier, fighting alongside Pompey. Caesar defeated Pompey at the Battle of Pharsalus. Afterwards, Brutus surrendered to Caesar, who granted him amnesty. Caesar would not have considered this man an heir. Instead, Caesar’s immediate successor was Octavian, his great nephew and adopted son, later known as Augustus.

Although the assassinators, at the instigation of Marc Antony, were given amnesty after Caesar’s death, Octavian vowed revenge. Marcus Junius Brutus and his brother-in-law Gaius Cassius Longinus, the mastermind of the assassination plot, quickly left Rome and amassed an army against Octavian. Decimus, en route to join them, was killed by a Gallic chief loyal to Marc Antony. Two years after the death of Caesar, Octavian and Antony defeated Cassius and Brutus at the Battle of Philippa in Greece. Not willing to be executed by Octavian, Cassius and Brutus killed themselves.

Marc Antony, although loyal to Caesar, was a rival to Octavian, even though Antony was his brother-in-law. Competition and disagreements between the two caused Antony to join forces with Cleopatra, an enemy of the Roman government and also ruler of Egypt and lover to both Antony and Caesar. Octavian crushed Antony’s forces. Soon after, Antony committed suicide. Cleopatra attempted to negotiate with Octavian, hoping to save Caesarion, her son, who was probably also Caesar’s son. Octavian butchered Caesarion, whereupon Cleopatra killed herself. Having disposed of his rivals, Octavian magnanimously honored Cleopatra and Antony in a public funeral. Thus, ended a long and tumultuous civil war and the results of the infamous Ides of March. Octavian ushered in the Pax Romana, a time of sustained peace in the Roman Empire for more than two centuries.

Today, March 15 is thought of as a day of foreboding and betrayal as in the saying “Beware the Ides of March.” The other Ides are not considered days of doom except when they fall on Friday, the 13th which happens this November. Watch your back on that day!

Next Article
Monopoly Anyone?
Cold winter nights are a time for families to hunker around a…