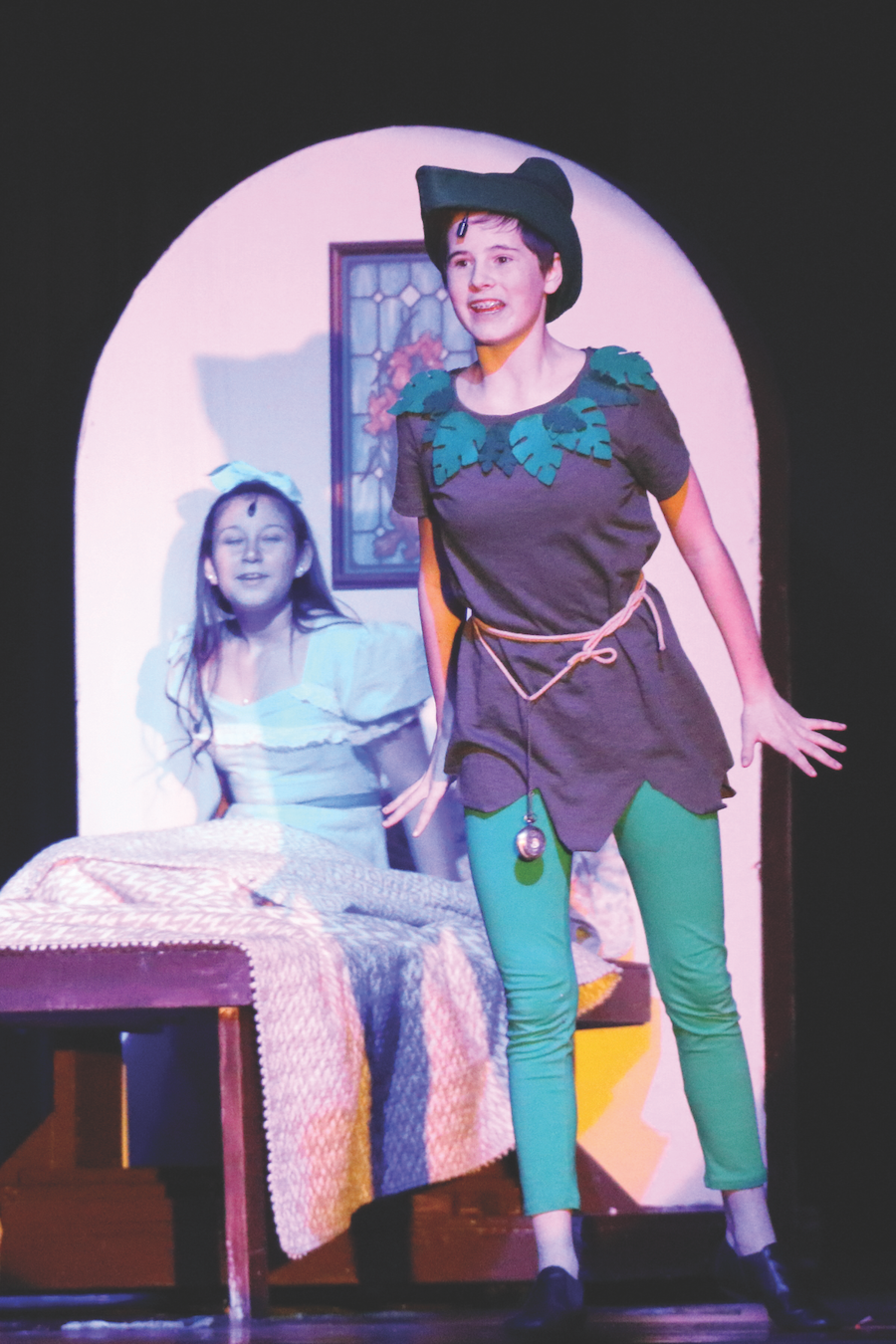 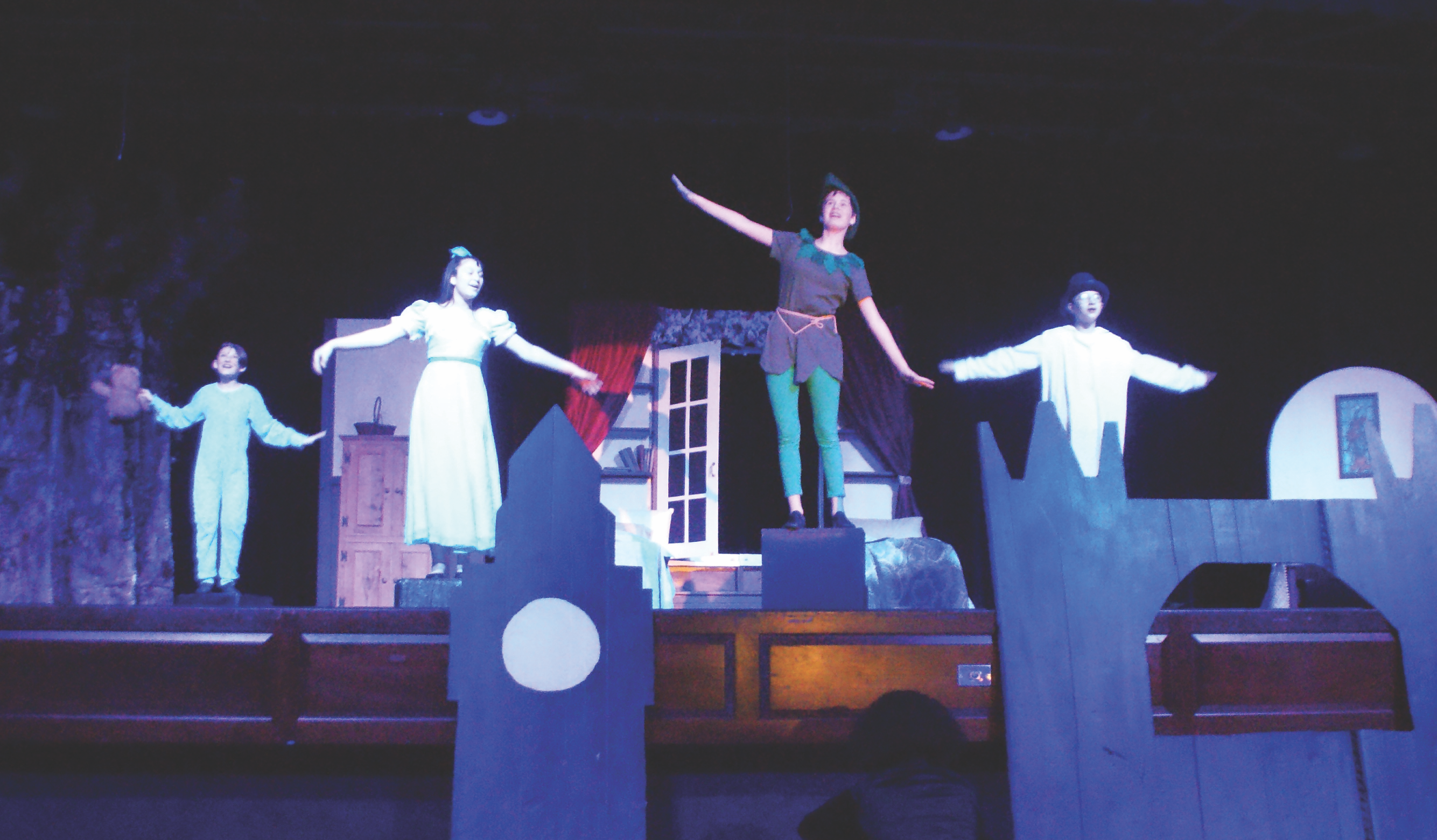 Peter Pan (Claire Halasi-Kun) shows how they will fly if the Darling children go with him to Neverland. Left: Wendy (Natasha Matos-Luna), right: John (Christian Flanagan). 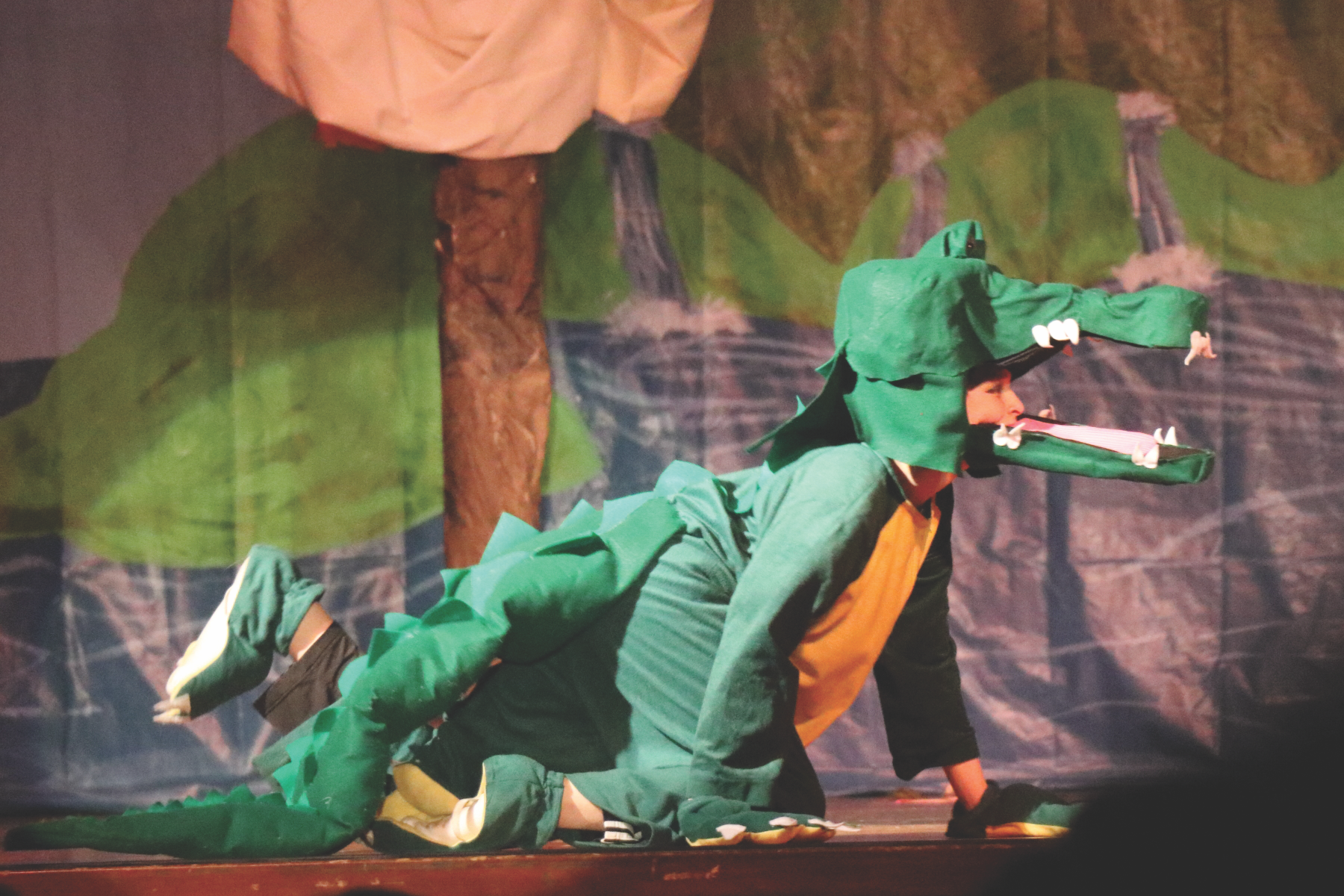 With his swallowed clock ticking inside, the Neverland crocodile (Quinn Boudreau) lumbers away after creating a troublesome stir. 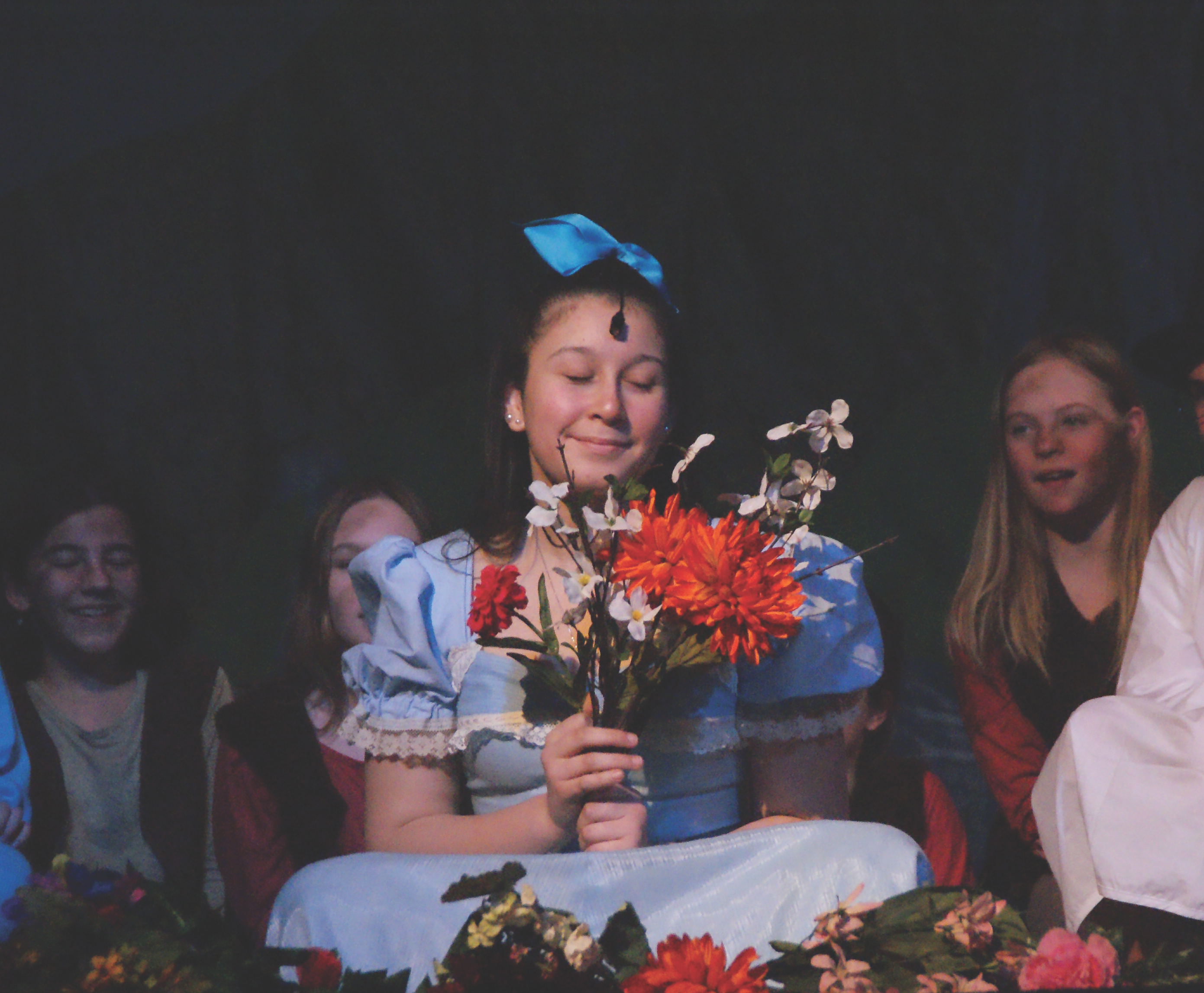 Wendy Darling (Natasha Matos-Luna enjoys the gifts she was given by the adoring Brave Girls of Neverland. 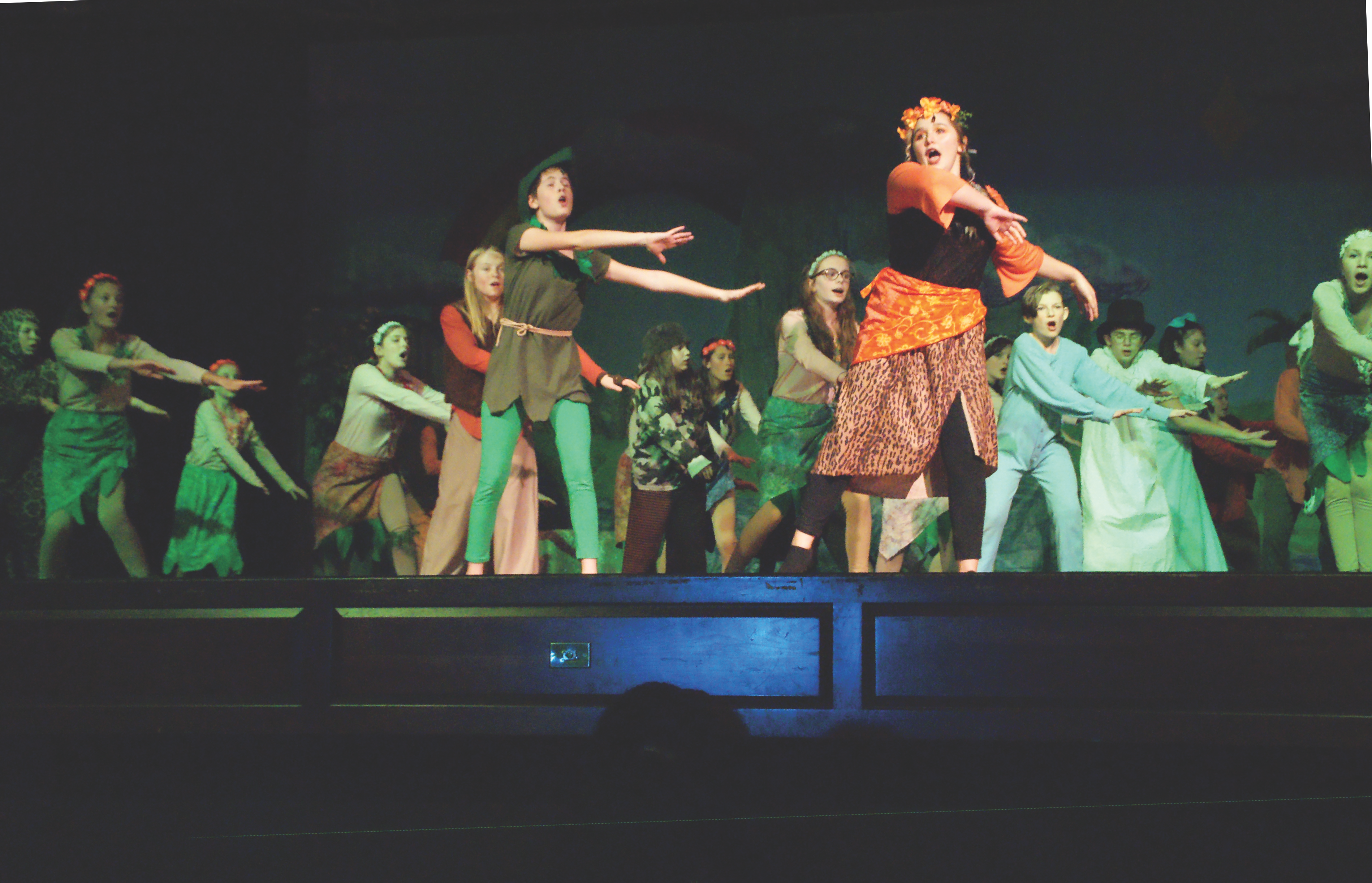 Along with the Darling children (right), Peter Pan (Claire Halasi-Kun) dances happily in Neverland with the Brave Girls and their leader, Tiger Lily (Annika Gustafson).

On the fourth weekend of February the walls of Suffield Middle School’s Sisson Auditorium bulged with delighted applause and laughter as a great bunch of enthusiastic students presented Peter Pan, Jr. The well-loved story of the boy who never grew up and his adventures in Neverland was replete with abundant music, impressive dancing, colorful costumes, fanciful sets, and a fine performance throughout.

The classic story, which became a Broadway musical and a very successful movie, was later rewritten for youth production. Directed in Suffield by Chelsea Kahle with musical direction by Laura Noonan, the big cast of middle schoolers seemed to have as much fun as the audience. This was a very musical musical.

Peter Pan was played by Claire Halasi-Kun, who was wonderfully expressive in the role as Peter persuaded the Darling children to fly with him to Neverland in search of his lost shadow. There they were tussled with the pirate crew of Captain Hook (scoundrelly portrayed by Jackson Dapo) and helped the Brave Girls save the Lost Boys of Neverland. The audience was particularly impressed with Tiger Lily, the Brave Girls’ leader (Annika Gustafson), and enjoyed the loyal presence of Nana, the Darling family dog (Devon Root-Blanchfield). And they laughed at the antics of the Neverland Crocodile (Quinn Boudreau).

An entertaining bit of stage action was the quite non-injurious sword fight between Captain Hook and his first mate Snee (Nick Dery), an adversary pair dramatically mismatched in size (as middle schoolers often are). An impressive performance was provided by a participant not listed with the cast. Tinker Bell, Peter Pan’s mischievous fairy sidekick, was represented by a bright spot of laser light dancing lightly around on the set under the skillful control of Mahi Relekar, a black-clad member of the light and sound crew. She performed crouching in the dark below the edge of the stage. Nice work, Mahi.