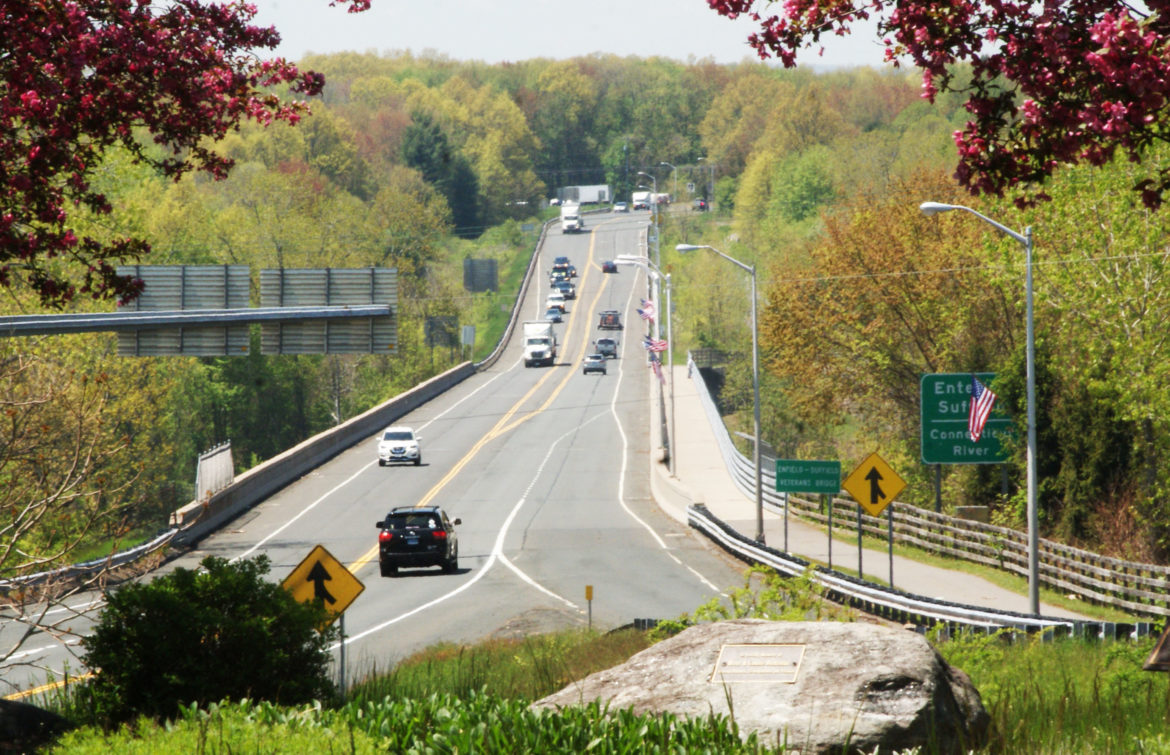 A pedestrian can be seen near the far end of the Enfield-Suffield Veterans Bridge in this unfamiliar view, photographed near noon in mid May from a small memorial garden next to Pearl Street in Thompsonville. From the garden to where the highway bends is about 6/10 of a mile.

Off Pearl Street in Thompsonville, diagonally across from the Pearl Street Library, there is a pleasant little garden with two comfortable benches nicely shaded by decorative greenery.  And from those benches is the view pictured here.  This photographer discovered the unusual view in another publication some months ago.

A bronze plaque visible on the big stone in the photo reads: “In Loving Memory of Brent & Connie Beckstead, Beloved Parents, Grandparents and Friends.”  A long-time Enfield resident, Mrs. Beckstead was a local teacher and for many years the evening coordinator at Asnuntuck Community College.  The school’s information center was named in her honor in 2017.  Remembered as “the heart and soul of Asnuntuck,” Mrs. Beckstead died in 2001.  Brenton Beckstead, a Marine veteran of the Korean War, was the food service director for the Hartford school system.  He died in 2004.

This photo of the Enfield-Suffield Veterans Bridge shows its wide break-down lanes and the painted center divider.  The span opened in 1966 as a four-lane bridge with narrow “shoulders” and no center divider, making a crossing in fast, heavy traffic conditions an uncomfortable experience for some drivers.

The markings were changed later as part of an unrelated matter.  The bridge had been built as part of an aggressive state highway expansion plan which included carrying Route 190 on a newly cleared route through the Suffield town center, a plan that met with successful resistance from the town.  This researcher suspects that there was even a plan for a second span.

The 1966 bridge was the last major bridge in Connecticut to be built with only two main beams.  When the Mianus River Bridge, built in the two-beam style in 1958, failed disastrously in 1983 because of a subtle, but critical fault, the State increased its bridge inspections.  And when the Enfield-Suffield bridge was discovered to be suffering from the same problem, emergency repairs were made and the bridge was reduced to two lanes – an agreeable change for many drivers and only rarely a bottleneck.

Next Article
Signs, signs…
I do my best to get along and go along. I’m not…