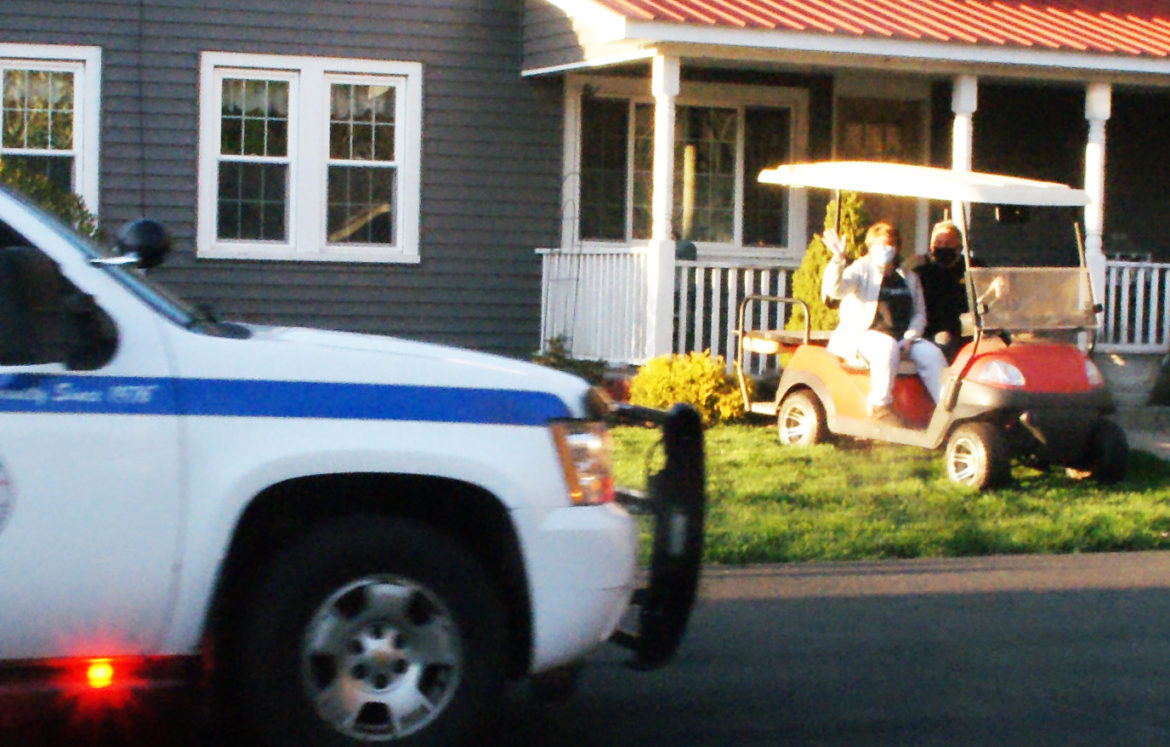 Patty Cerri Neis waves as one of the SVAA vehicles comes by in the substantial flash parade that welcomed her home after her recovery from COVID-19.

Flash mobs and flash parades are products of twenty-first century digital technology and the social media it enables, and Suffield is certainly enjoying the parades, if not (yet) the mobs.  A great example took place on Monday evening, April 28, when Patty Cerri Neis was welcomed home after 13 days at St. Francis recovering from COVID-19.

The idea for the parade was passed to two others by two members of Patty’s extended family and spread virally (excuse the expression), attracting a large response for this popular West Suffield resident.  The vehicles assembled at the Ebb’s Corner fire station and headed east on Mountain Road toward Cherrihill Farm, where Patty and Rick Neis live in a nicely restored old farmhouse, just south of the Warnertown Road corner.  (Eddie Cerri died in 2009, and Patty remarried several years later.)

The parade was to be a surprise, so Rick asked Patty to join him on a little golf-cart tour among their several outbuildings and gardens to appreciate the coming of spring on that lovely evening.  After a few minutes Patty heard sirens and wondered where the fire was, but Rick got the cart positioned just right to view the parade, which turned off Mountain Road, passed around behind the house on the farm’s ample driveway, came up alongside where Patty and Rick were parked, then turned back onto the highway.

Several police cars, an emergency response wagon and two ambulances, and three fire engines, along with almost three dozen pickup trucks and cars and motorcycles rolled by the golf cart with happy waves and shouted greetings.  Colorful signs read “Welcome Home Patty,” “Welcome Home Luv U,” and the like.  Some folks were standing in their cars’ skylights.  Patty said later she was truly surprised and “blown away” by the response.

Some family members and friends pulled off to gather and chat afterwards.  Some could recall Patty’s work at Suffield Pizza and her early years at Billy’s Pizza near West Suffield Center, where she helped that restaurant become known for its friendly atmosphere.  She also operated a day care center at home for 20 years.  That alone would justify a parade to honor her endurance.