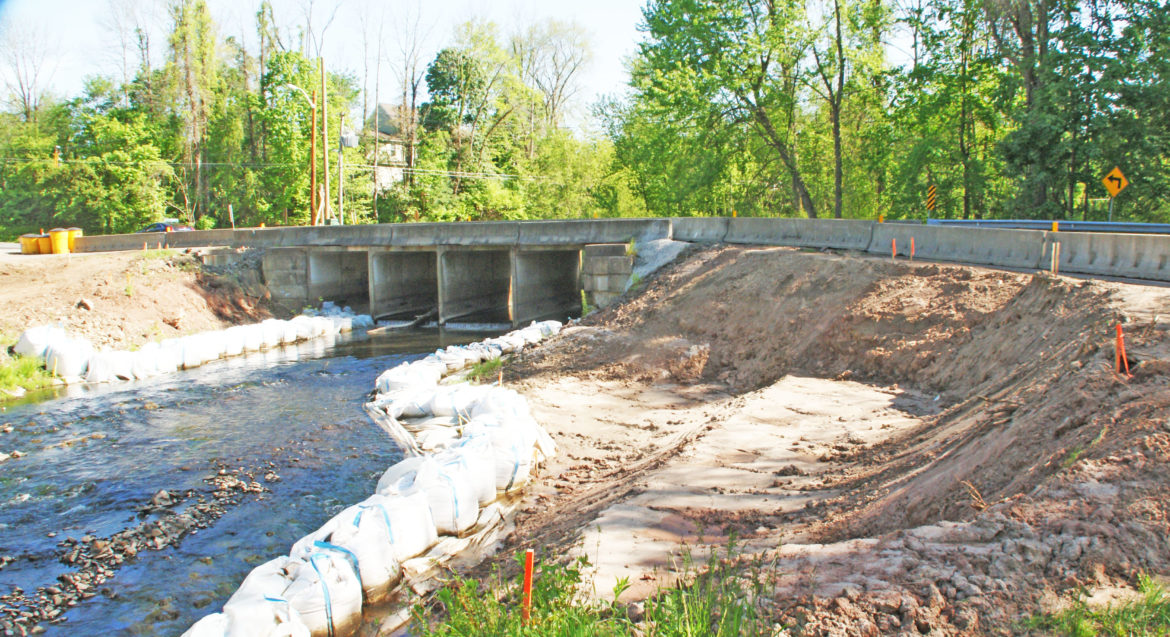 It seems like a slow process, but progress has been made. The shifted roadway (to broaden the curve) has been given its base coat of asphalt, and the old sewer pipe bridge and the pedestrian bridge are both gone.  A new temporary sewer pipe has been installed on a long, well-used I-beam just upstream of the old bridge, and at this writing, excavation is under way for the northwest abutment of the new bridge.  Also, for a few weeks, the north side jersey barriers that served as that bridge’s guard rails have been moved to partially cover the traffic lane on that side, reducing the bridge to just one lane.  The temporary traffic lights have been unshrouded and have been controlling the alternating one-way traffic.

It has been the Town’s intent to continue the alternating one-way traffic until the new bridge is opened, so as never to close the bridge totally.  But it was announced in the May 20 Selectmen’s meeting that the plan has changed.  The manufacture of the long concrete prestressed beams of the bridge has been delayed, and the change in plan now will close the old bridge entirely at some point, allowing the construction to continue more efficiently and restore the schedule for completion in October.  First Selectman Melissa Mack said that the change will also result in a $102,000 cost saving.

First Selectman Mack also reported another surprising item connected with this bridge project, this one potentially favorable in a very different way.  The former pedestrian bridge was installed next to the present Remington Street Bridge not many years ago to provide a safe crossing for the possible additional foot traffic that was anticipated from residential construction projects on the east side of the bridge.  The pedestrian Bridge has now been removed, intact, and is available for other use.

First Selectman Mack has been interested in providing access to Stony Brooke Park from the south.  There already is good access from the north, off Remington Street.  But access from South Street, while used by fishermen and swimmers, is limited by Stony Brook, which crosses the park near its south end.  So Town Engineer Gerry Turbet and First Selectman Mack have been working on the idea of using the surplussed Remington Street pedestrian bridge a short distance away in Stony Brooke Park.  Turbet reports that there may be a problem because the small section of the park next to South Street is in a defined flood plain, but he’s working on it.

Next Article
Sonny’s Parade
On a rainy Wednesday evening October 6, Sonny Osowiecki was celebrated for…