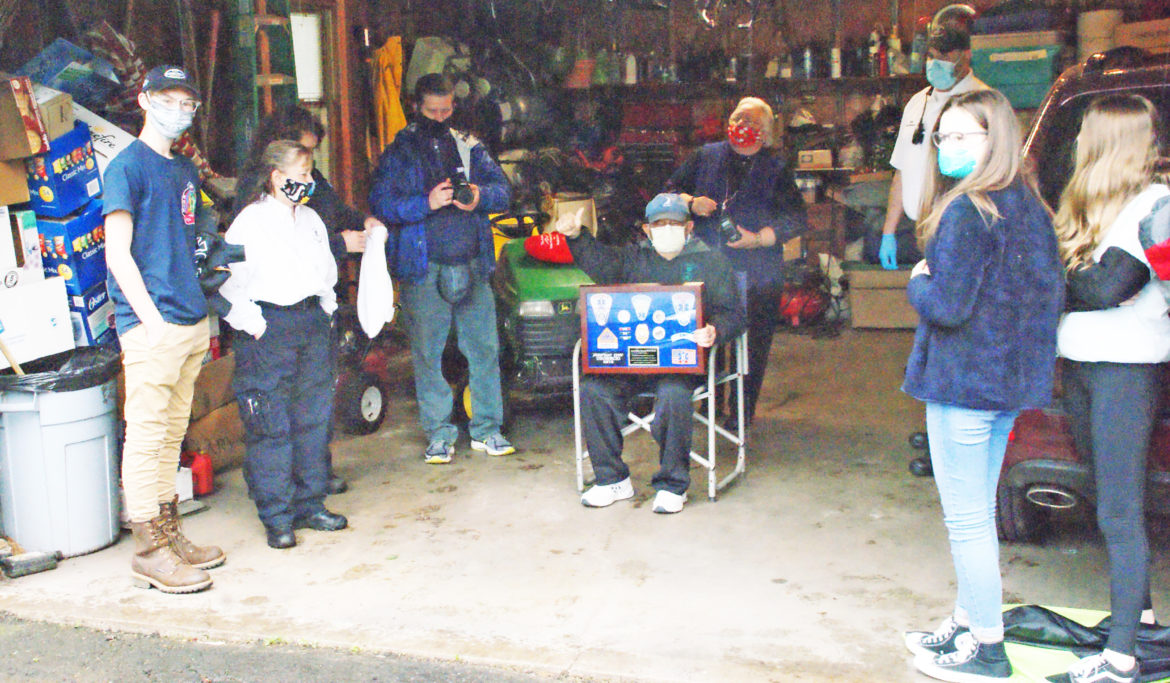 Following an impressive parade past his home on Bridge Street, Sonny Osowiecki, seated center in his recovery from major surgery, shows the mementos of his long service with the Suffield Volunteer Ambulance Association. It’s clearly “thumbs up” for his feelings after the surprise parade.

On a rainy Wednesday evening October 6, Sonny Osowiecki was celebrated for his recovery from emergency heart bypass surgery in April and honored for his recent retirement after 38 years of significant service in the Suffield Volunteer Ambulance Association.  Sirens wailing and honks blasting, a parade of police cars, ambulances, fire engines, shiny maroon dump trucks, a Mini-Bus and a number of cars rolled past Sonny’s home on Bridge Street, where he and his family were sheltered in the big double doorway of the garage, which made a fine viewing stand for a very surprised honoree.

At the SVAA, Sonny – his name is officially Stanley, but no one calls him that – has served in many roles and retired as deputy chief.  He has occasionally served as interim chief.  Before he retired from a long career at what this reporter thinks of as Hamilton Standard, he was a member of the computer group there.  He’s now recuperating at home after his stay at St. Francis Hospital, having skipped the customary stay in a nursing home.

Sonny is most deserving of the parade, as he has long been involved in serving Suffield.  He was active in the JayCees, helping organize the beer tent on the Green during the 1970 Suffield Tercentenary. That evolved into an annual Octoberfest and via the JayCee wives became Suffield on the Green.  Also in the JayCees, he was named Connecticut JayCee president of the year.  He was part of the group that started the Mini-Bus in Suffield, and he arranged for our town to join the 911 emergency phone system.  Since his retirement from Hamilton in 1994, he’s worked part-time for the Nicholson-Carmon funeral home.

Next Article
Can You Silly Walk?
An interesting pair of signs were planted in mid-April next to the…