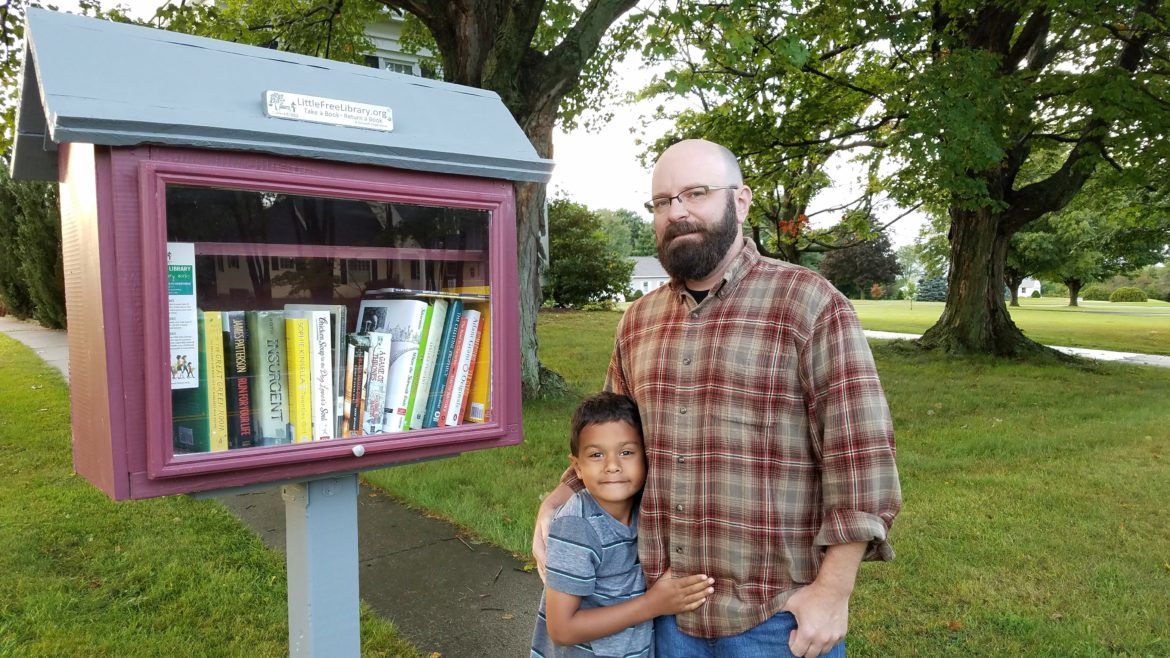 Jason Neely and his son Cormac on the September day they erected their library.

Without physical access to Kent Memorial Library and not wanting to increase what seems to be the daily runs of the Amazon delivery truck, what’s a book lover with time on her hands to do?  The answer: www.Littlefreelibrary.org , a nonprofit book exchange which fosters the building of neighborhood book exchanges.

We are fortunate in Suffield to have three (that I know of) such little libraries, all built for different reasons, but all sharing the common goal of providing a place where neighbors can take a book and leave a book.  Of the three, the only one that is “official”, which means it paid a fee to the Little Free Library organization and can be located by inserting our zip code on their world map, belongs to the Jason Neely family on Mapleton Avenue.  Neely is Director of Library Services in Enfield so his desire to promote reading seems a little like a busman’s holiday, but according to him, it was his wife’s suggestion to install one in their front yard.  Together with his son Cormac, the two sketched out designs and hobbled their library together using scrap lumber, drills and saws. Erected in September of 2017, the two seeded the library with their own books and sat back to watch the traffic. “It’s use ebbs and flows,” reports Neely, “with more stops in the summer and nice weather.”  He keeps an eye on the books and reports that fiction seems to be more popular than nonfiction. “If a book stays in there longer than 2-3 months, I remove it and donate it to the Enfield library book sale.” Regulars should be advised that Neely plans to put a fresh batch out in the coming days.

Nicholas Hyder of Randall Drive, built his little free book stand as a result of a high school civics class assignment to engage in something to help the community.  Using the plans on the nonprofit’s site and the knowledge he gained from a materials handling engineering class he took at SHS, he built, painted and erected his library in the spring of last year. He reports that after his initial provision of books, the stand became self-sustaining with books neighbors have contributed ,and he has not had to add books.  He states that his stand is “very popular” in the neighborhood with both kids and adults.  His father, Christoph, reports that they have seen an increase in use since the quarantine hit and Kent has been closed.

The third little library, on Pleasantview Street, was erected by Erin Stein’s father for her daughter Kylie’s birthday about five years ago.  Stein reports that the “neighborhood loves it and the kids and dog get excited when they see kids using it!”  They try to put new books in now and then and report that others have contributed to the supply also.

Based in Hudson, Wisconsin, the first free little library was built in 2009 by Todd Bol in memory of his mother.  His original goal was to build more than 2,500 little libraries, to surpass the record of Andrew Carnegie who financed the building of 2,509 libraries worldwide between 1883 and 1929.  Bol reached that goal in 2012 when he incorporated his nonprofit Littlefreelibrary.org. Since then, over 100,000 little libraries have been built in 91 countries, although the vast majority are located in the United States.  A visit to the website provides more information on the organization and its function and includes directions to build your own little library from scratch or order a kit.  It’s a great project and a wonderful way to recycle your books if, like me, you are too lazy to resell them on Amazon, and your bookshelves are full.