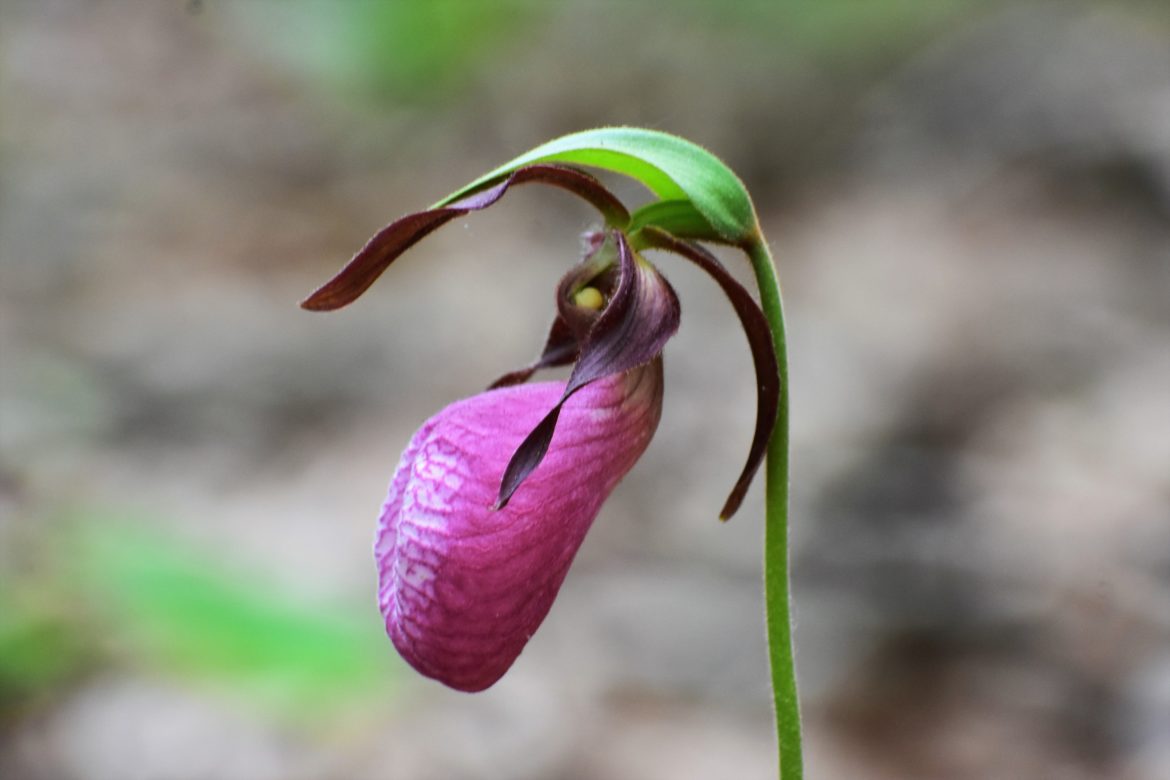 In May, Lady Slippers are a reward for hikers on the New England Trail in West Suffield.

There are many things in nature that are fleeting: the monosyllabic call of the woodcock, the chorus of spring peepers, the big travel night for amphibians, shooting stars, fields bursting with fireflies, fluffy dandelions heads, and, of course, spring wildflowers.  The tricky part about our spring wildflowers is that they are here one week and can be completely gone the next.  So that adds the necessary fire and mystique  to our steps as we set out, recalling from years past where the different flowers were and remembering just what week it was  that their blooms emerge.  In a way, it’s confining and freeing at the same time.  We have to get out to see them during a small window of time.  At the same time, unlike the animals and birds we pursue, the flowers don’t run for cover, so we don’t need our binoculars and our gag order is lifted. Most of what I know about wildflowers I learned from my mom as a kid roaming the woods.  I also happened to be between jobs during springtime between college and getting hitched, so my mom and I took to the woods again, as adults.  The wildflowers were just an excuse to get out and, man, I’d give anything to trek a few miles with her again.  But, like the wildflowers themselves, that time was fleeting, or it sure seems so now. Perspective has a way of condensing the longest stretches.

As we sauntered along, she taught me the names of the flowers that she had learned from her mother.  Most names harkened from an earlier time. There’s Dutchman’s breeches and unless you are binge watching Downton Abbey, breeches are probably not in your vocabulary these days.   Adders-tongue invokes peering into the open mouth of a snake, something a lot of people would prefer not to do.  Then there is bloodroot, marsh marigold, trillium, columbine, and the ultimate in New England wildflowers, the lady slipper.  There are a bunch of more understated and confusing wildflowers, which I leave for the experts to identify, as I am in a holding pattern regarding adding any new ones to my list. And, if you’ve got lady slippers, an orchid, believe it or not, growing here in New England, it’s pretty hard to look away.

Wildflower season coincides with the continuous loop of the Tom Petty ballad sharing that name circulating in my head.  It stays with me despite the claim that he only spent fleeting moments with the pen to write this song.   He said he wrote the whole thing in four minutes with a stream of consciousness lilt. I’m a fan of his and no stranger to that style of writing.  So, just maybe when you are out on the New England Trail in town and you catch a glimpse of some lady slippers in the Alcorn Preserve, you might be tempted to hit the play button for Petty’s soundtrack.  After all, who can argue with Petty’s lyrics “You belong among the wildflowers, you belong somewhere close to me.  Far away from trouble and worry. You belong somewhere you feel free.”  What’s not to love about that?  And, if nothing else, combining a playlist from a rock and roll legend with a trip in the woods makes looking for wildflowers seem a little more hip.

Next Article
A Mother’s Touch
There's magic in a Mother's touch, and sunshine in her smile. There's…