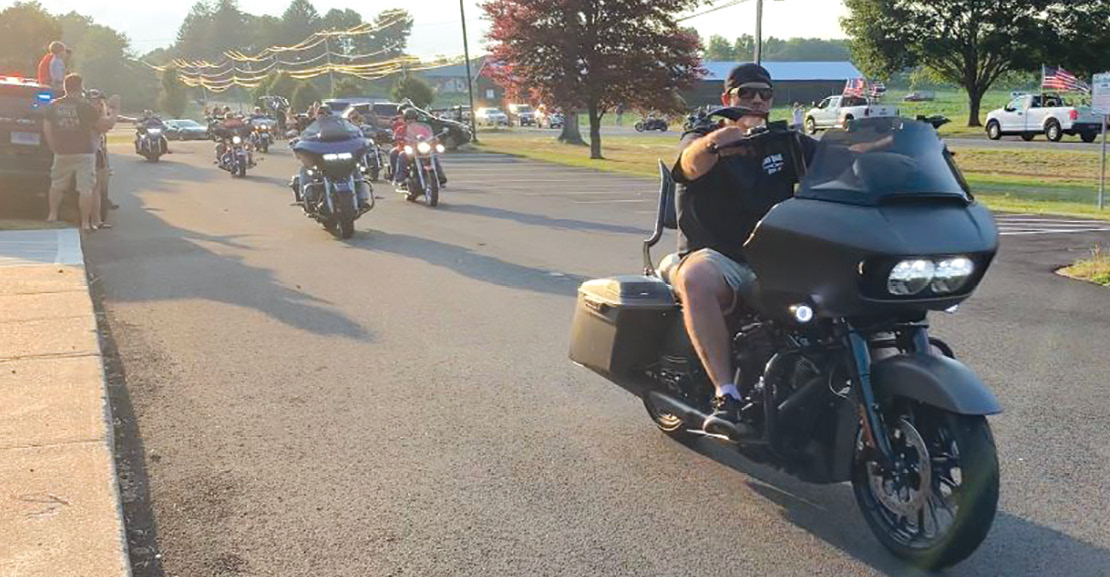 Gathered in front of the Suffield Police Station on July 2, several police families and others watch the big Back the Blue flash parade as it heads east on the Suffield Police Station driveway and back on Mountain Road to visit police stations in Windsor Locks and Windsor. Two well-decorated white pickup trucks can be seen on Mountain Road about to turn in toward Bruce Park and turn again to drive past the front of the station.

Erika Rozanski, proprietor of the Shamrock Cafe on East Street South, and her friend Jeanie Miller, founder of the Wounded Veterans Project, decided to honor and thank three local police departments with a flash parade. Erika made it clear that there was no ulterior motive, just thanks for the police officers’ service in this difficult pandemic period. The word spread at the Shamrock, which is particularly popular with motorcyclists, and it spread virally on line. So a tremendous crowd gathered at the Shamrock on Thursday evening, July 2, with vehicles decorated with signs, pennants and flags. They set out to drive past police headquarters in Suffield, Windsor Locks and Windsor.

It was indeed a very big parade, led by two State Police bikes followed by about 100 bikes and trikes, then about three dozen cars and trucks including some great classics and antiques. The parade came west out Mountain Road, then turned onto the Bruce Park access road and turned again onto the newly-extended driveway in front of the Suffield station. There were a few police family groups gathered there, along with some police personnel.

Without a pause, the parade headed back on Mountain Road to visit the other two towns. As they traveled a bit fast for balloons, not all the vehicles were lavishly decorated, but there were plenty of flags and banners. Several versions of the blue and white police flag were included. Out in front, the two State Police bikes stopped to block eastbound traffic on Mountain Road.

Next Article
Remington Street Bridge Update
Lower levels of concrete in both abutments have been poured, and forms…