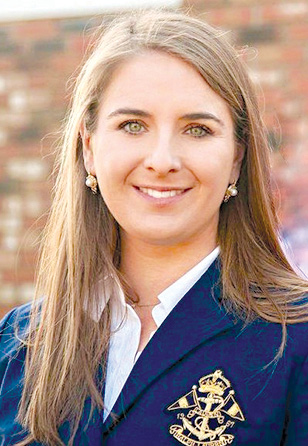 Although fathers have traditionally passed on their companies to their sons, in the case of the Demko clan, middle child and only daughter, Cheryl, was the one who desired to carry on the family business. Thus, Cheryl Demko Morello became a second-generation licensed funeral director, embalmer and owner of Heritage Funeral Home in West Suffield. She carries on from her dad, Chet, a lifelong Suffield resident who had a 50-year career in the business and opened the funeral home in 1976.

Recently she was named to the Hartford Business Digest “40 under 40” list for 2020. Culled from a list of 120 nominations, the award recognizes “outstanding young professionals in the Greater Hartford area who are excelling in their industries through their leadership roles.” The winners come from the private, public and nonprofit sectors and are role models for their peers. Although the award is without any monetary remuneration, (“It’s sort of a high five,” says Demko Morello, age 37), it is still quite an honor to be chosen.

In what has historically been a male dominated field, the percentage of female funeral directors has gone from 5% to 43% in the past 40 years. Demko Morello saw the job as a natural progression from her BA in Health Education from Springfield College. “I was trained in mental health and always wanted to help people going through difficult times.” She worked for a time as a social worker doing crisis counseling before attending the American Academy of Mortuary Science in New York City. The three-year program consisted of two years of academic learning and one year of clinical study as an apprentice. Back in Connecticut she worked for Sheehan-Hilborn-Breen, a funeral home in West Hartford, for ten years before purchasing Heritage from her father four years ago.

In addition to her job as a funeral director, Demko Morello has taught restorative art at Lincoln Community College (formally Briarwood College). Restorative art is the process of making the deceased look like (s)he did when (s)he was alive and combines art with science. It can be very difficult when the deceased has suffered a traumatic physical injury and features must be reconstructed.

In addition to the “40 Under 40” accolade, which is regional, in 2016 Demko Morello received national recognition when she was named one of the “Top Ten Female Funeral Directors” by the National Funeral Home Directors Association. That award came with a Florida vacation, additional training and seminars and a modest monetary award.

The position of funeral director is both physical and replete with paperwork given all the documentation necessary when someone dies. When asked what she likes most about her job, Demko Morello says that she finds satisfaction in helping people through a very difficult time. “It can be very demanding in that you have to be your best self to help people grieve and assist them through the process.” The worst part of the job is the hours, since funeral directors are always “on call”. In addition to being on call 24/7, Demko Morello has regular hours where she assists in preplanning funerals and otherwise manages her employees and the business at which, if awards are any indication, she is doing a wonderful job!

Demko Morello believes that the coronavirus has made the grieving process even tougher on families since gatherings are off limits and fewer services can be offered. “It is very traumatic and painful for loved ones not to be able to say ‘goodbye’ in the traditional way.”

On the personal level, Demko Morello resides in West Suffield and is married to Josh Morello, a fellow Suffield High School alumnus with whom she has a toddler son, Ben.

Next Article
What’s happening at SCA this Month?
Staff has been working inside our locked door since the pandemic began.…