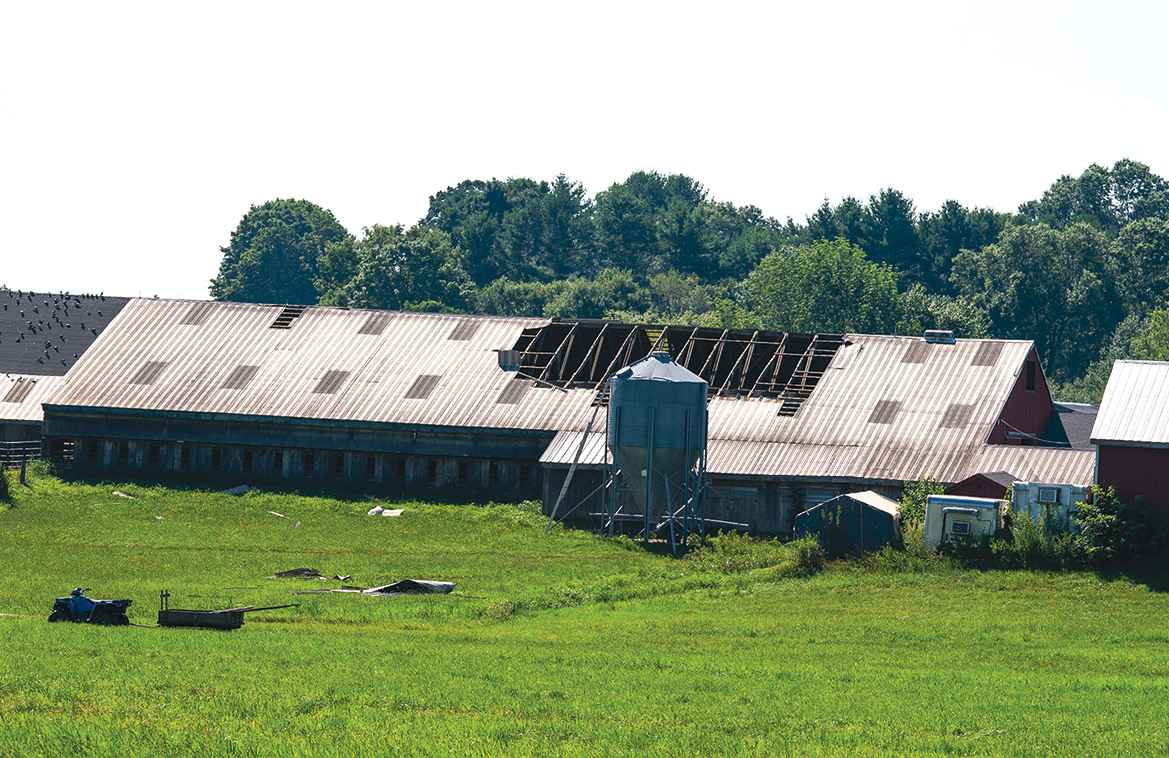 The wind tore off a large part of the roof from this Hastings Farm barn.

The brief, severe, spotty wind storm that hit the western part of Connecticut on the afternoon of Tuesday, August 4, was just about everything it was forecast to be when Tropical Storm Isaias passed by on its way north. Everything, that is, but rain, and that’s something we really needed — there were only a few sprinkles.

In Suffield, a number of roads, including several through routes, were closed by downed trees and wires. The Town and the State cleared what they could, quickly, but those that involved wires required Eversource’s attention, and the utility company was overwhelmed by the damage. The public outcry against Eversource’s apparent lack of adequate preparation was extreme; even Governor Lamont was critical.

A number of individual homes and other structures were damaged by falling limbs or trees. There was at least some wind-blown litter everywhere and scattered locations required major clean-up. At least one prominent barn roof was torn off by the wind.

Eighteen percent of Eversource’s customers in Suffield were reported to be out of power, much fewer than in the 2011 ice storm that affected so many and much fewer than in any of the other towns in the Journal Inquirer’s distribution region. But among that 18 percent, many found the difficulties of living without power in August more difficult than in October 2011, especially those depending on their own wells for water. After the ice storm one could don winter clothes for warmth. Also, the Town quickly opened a public shelter at the high school.

This time, with temperatures in the high 90’s and no air conditioning or fans, staying home was miserable, and for a few days folks whose roads were blocked couldn’t even drive to visit luckier friends. “Oh, why didn’t we buy that portable generator!”

After taking stock, Eversource predicted that Suffield would be fully connected by Monday evening, August 10, and all their Connecticut customers would have power by the next day. Their predictions proved to be about one day too optimistic. Some Suffieldians suffered over a week of overheated misery, and clean-up would continue for many weeks.

Next Article
How Covid-19 Has Affected Students
In February 2020, most Suffield students had found themselves continuing to endure…