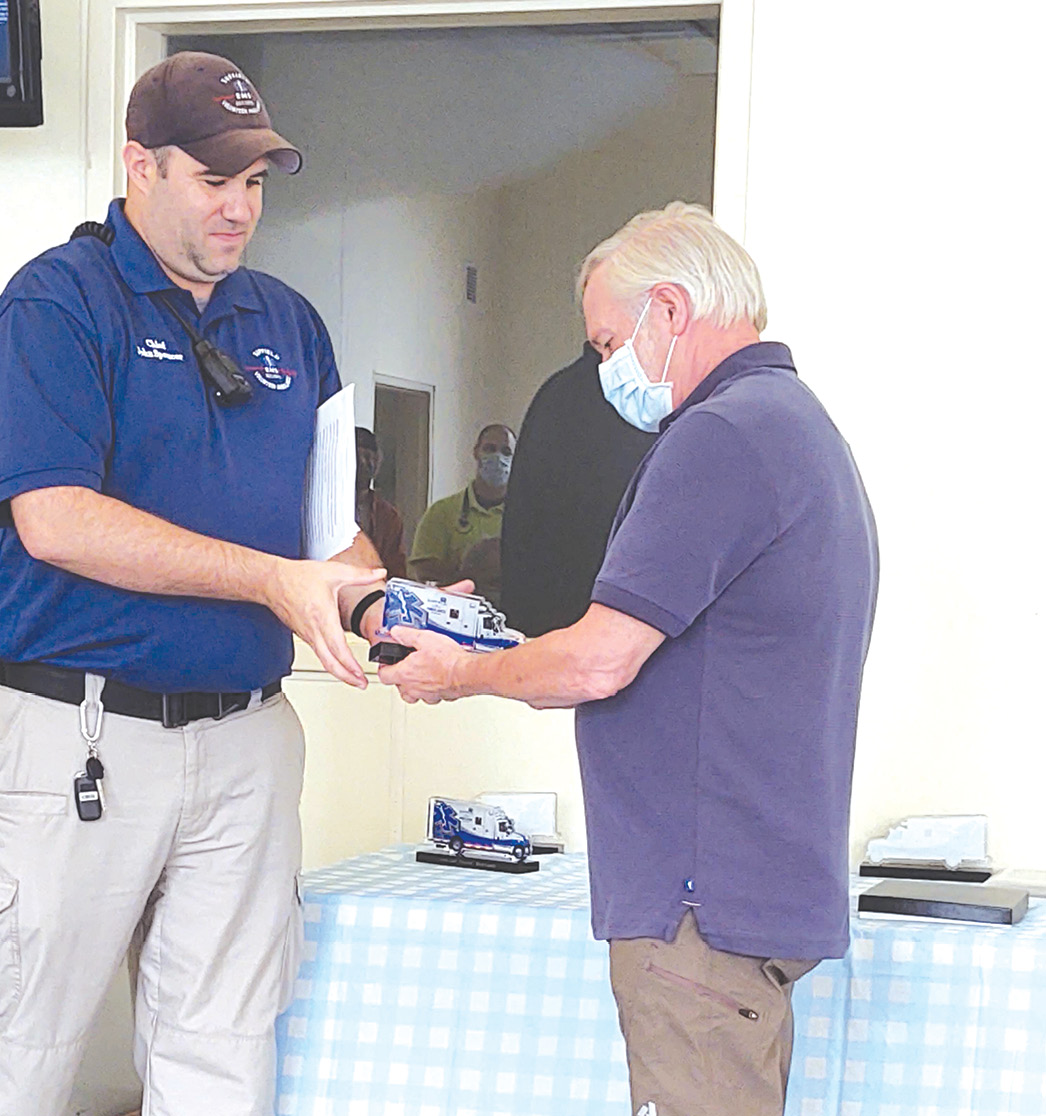 As was the case with most everything during this pandemic, the annual Suffield Volunteer Ambulance Association Awards Ceremony was, well, vastly different. But after changes and multiple delays caused by virus, the SVAA persevered and on August 29 was able to honor many of its extraordinary volunteers who, despite the risks, continued to serve when most needed.

The banquet to honor the volunteers had been scheduled for the spring, at Crestwood Country Club. When the event had to be cancelled due to the pandemic, the SVAA remained determined to recognize the special contributions of its members, and after waiting for the recovery of one of their own who was battling a life threatening case of the Corona virus, to comply with health restrictions, the event was rescheduled for the parking lot of the SVAA in mid-August. It had to again be postponed when an EMT tested positive, so the EMT and others potentially exposed could comply with its safety protocols. Finally, the event took place, but as could be expected in 2020, it rained. Although a tent had been set-up, predictions of thunderstorms made that too unsafe. Undeterred, ambulances and trucks were moved out of the large bays and spaced out tables were set-up in the garage. Attendees were served in the large training room by employees from Bears Smokehouse Barbeque.

John Spencer, hired as Chief this year, addressed the assembled and recalled that when he first read about the virus and how contagious it could be, he feared that he would not have sufficient volunteers to appropriately staff. He recounted his surprise, and delight, as the volunteers, notwithstanding the risks and the serious illness to one of its own, continued to show up. Each shift was staffed, and sometimes there were sufficient volunteers to have a second or even a third ambulance ready if needed. Our community clearly owes a debt of gratitude to all these volunteers, not just those receiving the awards described below.

At the event, the SVAA’s Lifetime Achievement Award was awarded. Unlike most, that award, is not given yearly but, rather, only when deemed appropriate. The award was given to past Chief Arthur Groux. Art served the organization for twenty years, fifteen as Chief of Service. Art moved on to a new role in Vermont but has remained a volunteer hoping to return, and ride shifts, when Covid restrictions permit. The penultimate award, the Chris Schmeck award, was awarded to Sonny Osowiecki. This award honors a member who consistently demonstrated performance to enhance the SVAA. Before his recent retirement, Sonny had been a mentor to many and had served as Chief of Service four times before retiring recently from his position as Assistant Chief.

Two Zak Awards were awarded to members for demonstrating service to the public in addition to their exemplary service to the SVAA. The first went to Rich Leach, a long-time member who helped secure a $7,000 grant used to provide the town with three defibrillators and coordinating CPR and First Aid training for over ninety residents. The second recipient was Dr. Andrew Wakefield. A practicing surgeon, Dr. Wakefield serves as the SVAA’s President and regularly travels abroad to aid the less fortunate who need medical care.

The Rising Star Award, unsurprisingly, is awarded to a new member rising quickly through the ranks and who stands out among their peers. This year’s recipient, Maha Maria speedily progressed to EMT1 status, cleared driver training and became a CPR Instructor. Frank Sedlik was selected for the Officers’ Award, given to a member who, in the opinion of the officers, exemplifies and contributes to the attainment of the SVAA’s mission and vision. Steve Pedneault was named the recipient of Directors’ Award after volunteering his time and financial expertise to assist an important project.

The organization expressed appreciation to Kristen Carr, for 1998 hours on calls during the year, the most of any non-resident. Deputy Chief Don Miner was recognized for 878 volunteer hours on calls (in addition to his serving as an officer and a Board member), as well his 30 years of service.

A touching and poignant moment occurred during the awarding of the Hero’s Award, which highlights a call during which the actions of the crew (or of other community partners or bystanders) have had a direct impact in the outcome of a critically ill patient. It was presented by Lori Durler, who suffered a cardiac arrest during a transport to a hospital following a syncopal episode. The crew’s rapid recognition and treatment made sure Lori was able to present the Hero Award to Scott Waddell and Jen Michalman, her relative.

And lastly the Perrault Award, awarded to a member who demonstrates service beyond the ordinary. It was issued to EMT John Ryan, the EMT who, for months battled a life-threatening case of Covid 19 who, happily, was able to attend the event. A member since 2015, John had volunteered 1,300 hours the year prior to his medical problems while also attending a paramedic program. When John was discharged from the hospital, greeted by many SVAA volunteers and others, John pledged to return to full service.