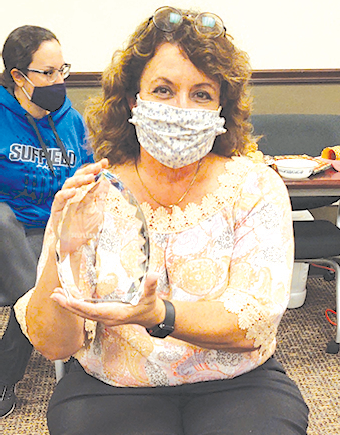 At the SVAA Annual Membership meeting, Laura Steinmeyer displays the special award she was given for her dedication to the Association and valuable service as Interim Chief during this year’s leadership change.

The Suffield Volunteer Ambulance Association held its Annual Membership Meeting on September 14. The meeting is open to all members and provides an opportunity for an update on the year, plans for the future, and the election of Board Members for the upcoming year. Due to spacing requirements, only twenty-five members were able to attend, but the remaining members were able to attend via Zoom.

Dr. Andrew Wakefield, the SVAA President, began the meeting by thanking all members for their extraordinary work during this most extraordinary year. The SVAA Board consists of both providers and non-providers from the community. The terms of one provider position and two non-providers were expiring and had to be filled. Nominees were on a written ballot, and floor nominees were accepted. A written ballot was provided to each member present. Those not attending physically were able to vote with absentee ballots turned in prior to the meeting. This year, due to the restrictions on those who could physically attend, members were also able to join via Zoom and allowed to vote for a person nominated from the floor. All ballots were, to the extent possible using a Zoom option, secret. The members elected three incumbents, Don Miner, Jack Muska and Jay Presser to return for another term.

The Chief of Service, John Spencer, then addressed the members regarding plans for the year and policy changes, which largely dealt with the pandemic. He then presented Art Groux, the former Chief, who was unable to attend the Awards meeting in August, with his lifetime achievement award. Also honored by the Board was Laura Steinmeyer, who was recognized for her dedication to the Association as demonstrated by her willingness and hard work, stepping up to assume the Chief of Services duties on an interim basis during the period between Groux’s departure and Spencer’s appointment.