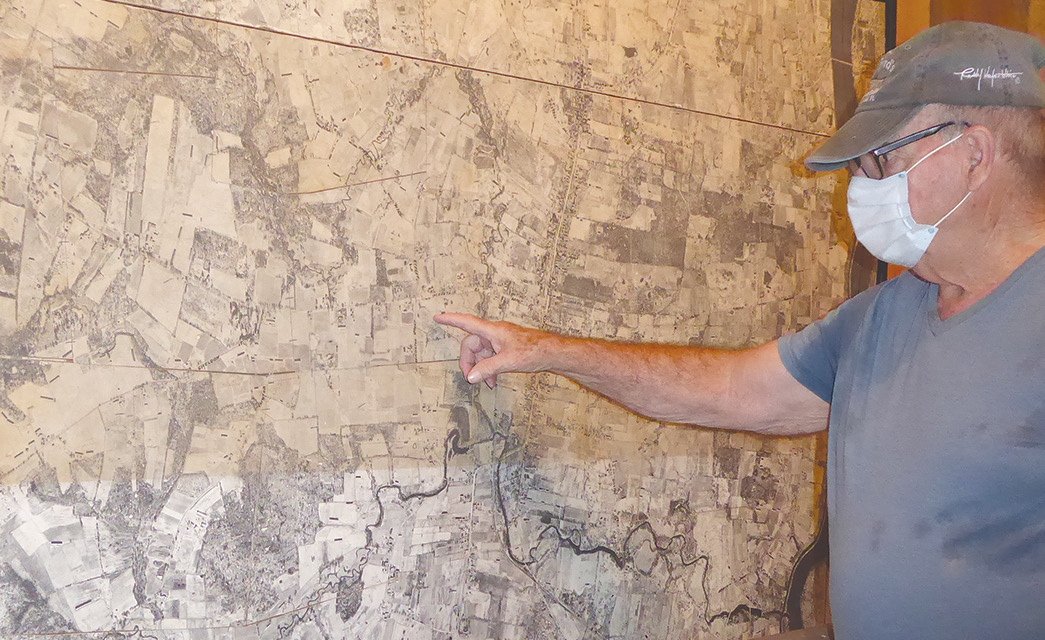 A visitor points to his home’s future location on the big aerial photomosaic map exhibited at the King House Museum. The map shows Suffield during the winter of 1948-1949, just at the start of the town’s post-war population expansion.

One can glean much from the immense aerial map of Suffield which is hung on a wall of the barn at the King House Museum, the home of the Suffield Historical Society on South Main Street. By noting which buildings are present or absent, Lester Smith, the curator of the museum, pinpoints the date of the photographic map to the winter of 1948-49. He speculates that Delphina Clark, an earlier historian, may have commissioned the flyover and built the map as a mosaic from the different photos obtained that day.

Delphina Clark came to Suffield in the 1930s. She was the first female architectural graduate from Yale, although she was never a practicing architect. She married a Springfield businessman with whom she had a son and devoted herself to the history of Suffield. From the 1930s to the early 1960s, she researched Suffield land records, ultimately creating an 11-volume set of typewritten notes. An off-shoot of her research was a six-volume set of photographs and notes on old Suffield houses. Both sets are an invaluable source of information which might have been lost without her research skills and perseverance. Her interest in Suffield history included the restoration of two old houses in which she lived: the first was the William King house on North Street; her final residence was the Lewis House on Hill Street.

Lester found the aerial map, discarded and intended for the dump, removed from a locked room at the former Bridge Street School. He immediately realized the map’s value and asked to add it to the Society’s collection. Well-lit, repaired, and mounted in the barn, it is easy to see the Suffield streets, meandering streams and the minute images of tobacco barns, houses and other buildings. Where there had been pastures in an earlier Suffield, forests of trees had sprung up. One can even tell if the water in a pond or lake was iced over. The old Enfield dam is present, as well as the piers from the bridge that spanned the Connecticut River at the bottom of Bridge Street. The sliver of Enfield in the aerial view shows the sprawl of the Bigelow carpet mill, at one time the largest carpet mill in the United States, and the urban housing units which surround it, a sharp contrast to rural Suffield.

However, in rural Suffield, two compact housing areas can be seen on the map. They were pre-war low-cost housing developments, both off of Thompsonville Road: one was down by the 1894 Enfield Bridge between Thompsonville Road and Burbank Avenue and the second was the area between First and Fourth Streets. Both were within walking distance to Enfield and mill jobs. Lester hypothesizes that there had been a plan which was never enacted to connect two trolley lines between Enfield and Suffield to provide low cost transportation.

There is a mistake on the map. The border between Enfield and Suffield is noted with a thick black line in the middle of the Connecticut River. But the line cuts straight down King’s Island from point to point. That is the mistake. Lester explains that in 1898, a Committee of the Superior Court of Connecticut determined, after careful study, that the line should curve across the island, midway between the opposing banks, not at all straight (which puts most of the island in Suffield).

The aerial map is only one of the treasures at the King House Museum. Although the museum has been closed to the public during the Covid-19 pandemic, it will be open during the month of October on Wednesday and Saturday afternoons. Discover history where you live.

Next Article
Rotary Sand & Salt Program for Seniors
The Rotary motto is “Service above Self.” Rotarians are involved in many…