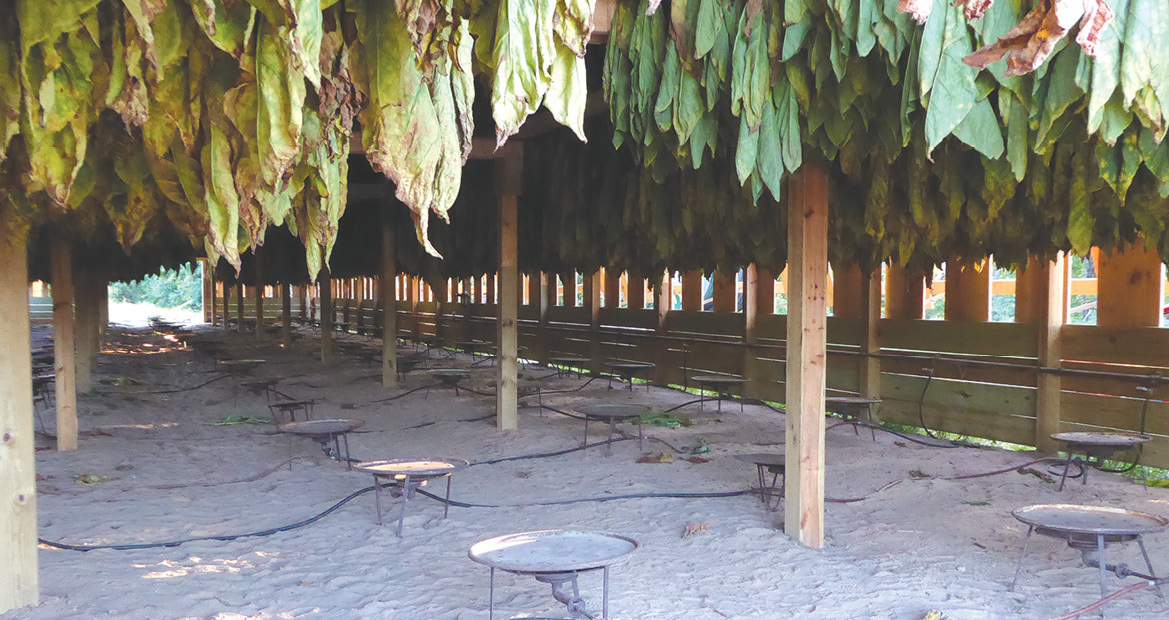 Speared broadleaf hangs from the poles of Carl Christian’s new tobacco shed off North Grand Street. Below are the propane burners, ready if necessary to help control conditions during curing. Near this 10-bent shed is Christian’s second new shed, 14-bent long, also full. A bent, the distance between between the verticle posts, is 16 feet.

This spring, a New York contractor who specializes in farm structures was hired to build three curing sheds for two Suffield tobacco farmers and a few more in Southwick. Carl Christian needed his two sheds for the broadleaf tobacco he planned to grow on land he recently bought off North Grand Street. Austin Phelps has been growing out on Spruce Street, where his new shed is very visible to Suffield motorists. Perhaps because of that visibility, he installed a neat white sign above the front end doors, reading, “Custom Built for Austin Phelps – 2020.”

All three of the new sheds are very similar in general design. Like most sheds in recent decades, their ventilating slats are hinged at the top, swinging out in sets. All three are nine poles wide and tall enough to accommodate the usual three layers of tobacco stalks. Christian and Phelps have different ideas about the end doors, one with three pairs of big doors on each end, the other with one double door on each end, flanked by sets of top-hinged slats. “De gustibus non est disputandum.” (In matters of taste, there can be no dispute.)

What is interestingly different from older sheds, in all three, is that the structures use galvanized nailing plates at the joints, and there is no really rough, or natural, timber. The poles on which the spear lath rest are neatly sawn four-by-fours, all secured firmly in place on the cross beams. Has OSHA taken an interest in tobacco shed design?