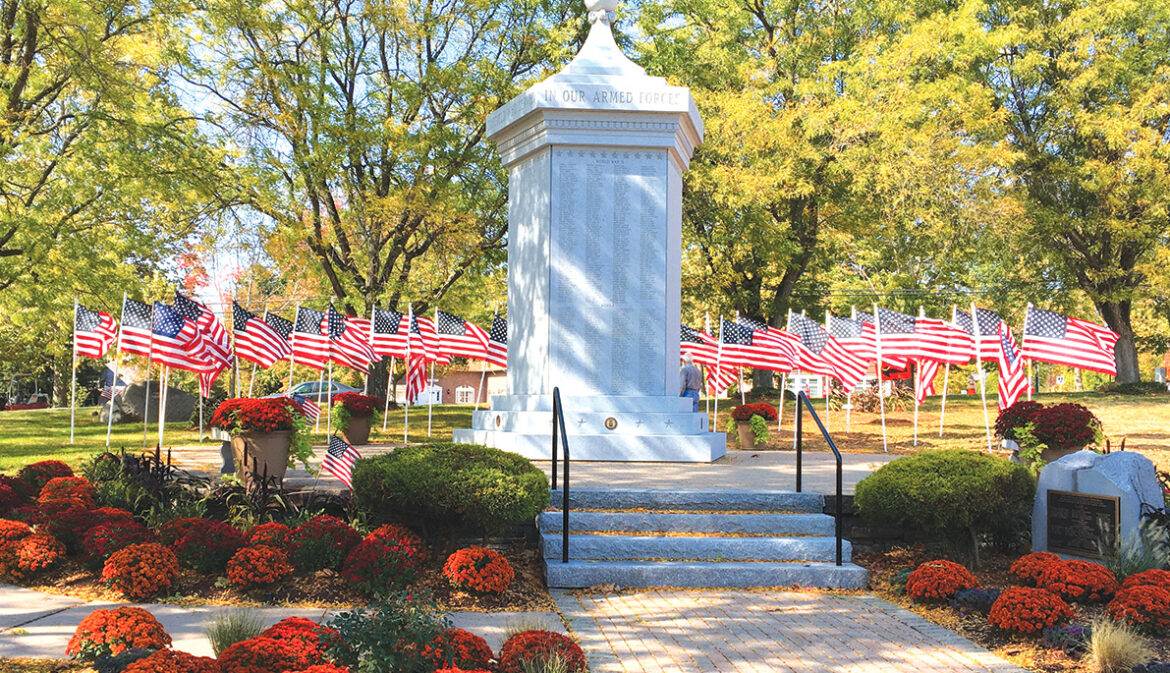 The Veterans Park portion of the 350th Anniversary Field of Flags display, chaired by Sue Mayne and Jean Matejek, is shown brilliantly on an autumn day in October.

Suffield’s first experience with the “Field of Flags” concept was assembled on a breezy, beautiful Saturday morning of the 350th celebration weekend, October 10, with great results. A delivery mix-up had postponed the set-up one day, but a busy crowd of volunteers, working with the ever-ready Suffield highway crew, got the job done. Three hundred and forty-nine bright, new, 3-by-5-foot American flags flapped happily in the fresh breeze atop shiny, white 8-foot poles, a majority of them already tagged with the names of those who were being commemorated.

On Friday, event chairs Sue Mayne and Jean Matejek had carefully marked the locations with dabs of white paint: 30 of them in two 3-by-5 rectangular grids next to the Veterans Memorial and 319 more in an 8-by-40 grid on the middle green. (The total would have been 350, for the anniversary being celebrated, but one spot was occupied by a young tree near North Main Street.)

Saturday morning began with the highway crew pounding short lengths of rebar into the white spots. Then they fastened the flags to the poles they had cut from long lengths of PVC pipe and carried them out to slide over the rebar. Out in the array, a large crew of citizen volunteers assembled name tags with bright yellow ribbons and tied them at the lower grommets of the flags. The named flags were organized in alphabetical groups, with guide letter markers to help visitors find the flags they had sponsored. Over 300 were individually sponsored. A sign at the south end of the array said the Field of Flags was made possible by a grant from the Amiel P. Zak Public Service Fund at the Hartford Foundation for Public Giving; another sign, facing the road, listed other major donors, with PeoplesBank as the Platinum Donor and six businesses and individuals in the Gold category.

Most of the flags honored specific heroes, with the donor’s name on the tag as well, but a batch at the south end honored groups, like “Veterans of the Korean War,” or “Front Line Medical Workers.” A considerable number near the Bicentennial Bandstand were left untagged, to accommodate late donors. The 30 at Veterans Park were all untagged.

By mid-day, visitors were wandering through the comfortably-spaced flags, finding, or just browsing, the names. And on many following days, Suffield’s glorious Field of Flags was seldom empty. The flags are to remain past Veterans Day, through November 13.