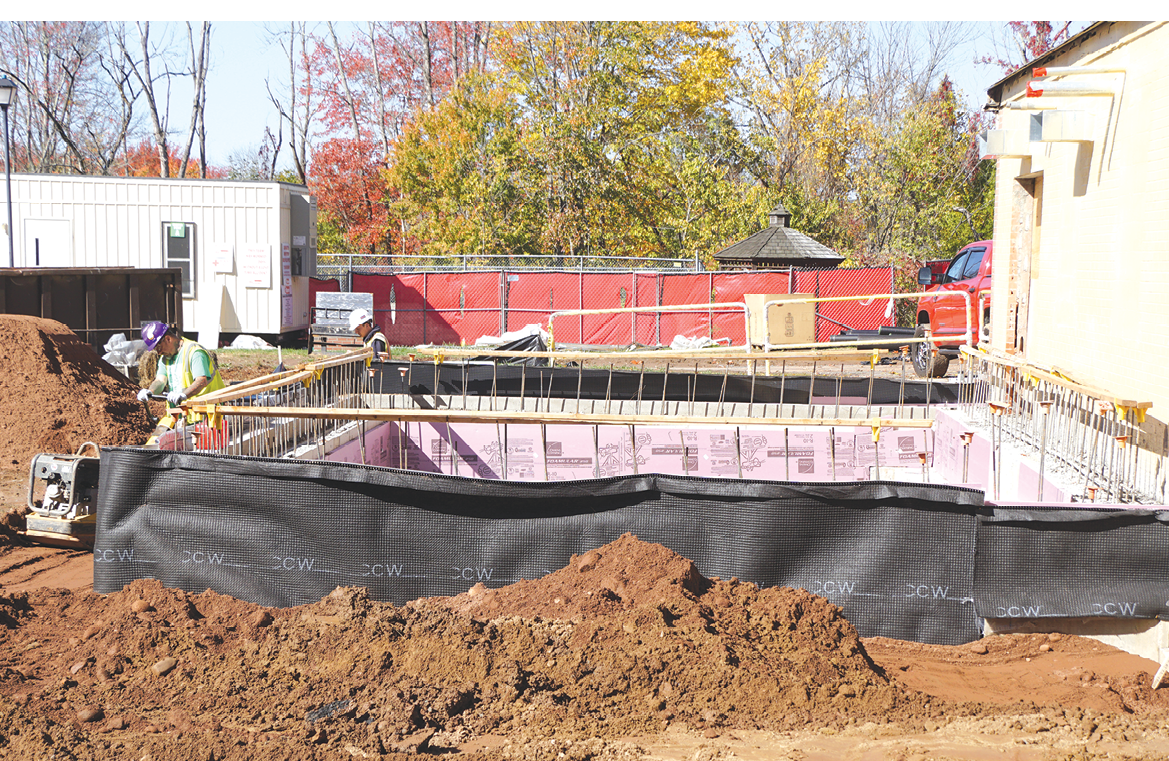 On October 14, a construction worker guides his power compactor around three sides of the foundation for the new Town Clerk’s vault being added behind the Town Hall. The 600-sq. ft. vault will connect to the Town Clerk’s office, which will be relocated to the former lower level meeting room at the right in this photo. The newly cut opening for the vault door from that room can be seen at the far end of the wall. The concrete walls of the vault will have no windows.

Renovation work is reported to be making good progress at the Suffield Town Hall, a great deal of it taking place inside, out of sight. The October 15 meeting of the Permanent Building Commission, which was held in a hybrid fashion with several members together at the West Suffield Fire Station and others participating by Zoom, heard Gilbane Construction project manager Jonathan Moulton review the work. He described progress on the foundation of the new vault being added at the rear of the ground floor. The new steel beam required because of the removal of a wall in the ground floor has been installed. He reported that progress on the second floor had brought almost that entire area ready for painting, and the first floor was well along too.

Four specific unanticipated problems identified as AYP matters (Authorization To Pay from “Owner’s Allowance”) were discussed. These were: problems with various door locks, fire dampers found to be required in the two main vertical risers carrying wires and pipes from floor to floor, the desirability of putting wiring now in Wiremold into hidden conduits, and fireproofing various spots where wires and pipes passed through walls in open holes. All four were approved by the Commission and, as the PBC is in an advisory role in this project, they were passed on to First Selectman Melissa Mack for her decision. It would be an informed decision, as she was present at the meeting, virtually.

All that took only half an hour. Then project architect Angela Cahill, of QA&M, the project’s designers, gave a well-illustrated presentation on the issue of ADA ramps at the front door. The design of these ramps had been interrupted by the Suffield Garden Club’s proposal that a large rectangular planter be installed within the three segments of the proposed three-segment, U-shaped, ramp at the left of the stairway and door stoop, whose elements were to be rebuilt somewhat improved over the old configuration. Cahill displayed drawings and renderings of several approaches to the ramp issue, one including the planter. Various walls and ramp railings were considered, including an extended ramp U that would be shallow enough not to require railings. Appearance, cost, and schedule were key elements of the hour-long discussion of the ramps.

It was agreed to meet again in three weeks or sooner to settle the ramp design issue. This discussion took over an hour.

Next Article
Veterinarian Comes to You
We are happy to welcome a new and innovative business to Suffield!…