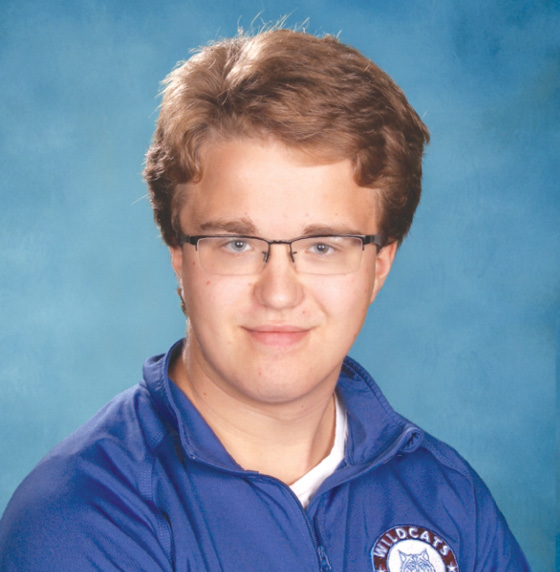 Congratulations to Ben Begley, who was chosen as the Rotary Student of the Month for September. He is a senior at Suffield High School and has been on the honor roll throughout his four years here. He has been on the Varsity ice hockey team, where the team won the conference championship in 2020. Ben is also on the boys Varsity golf team, where he was selected as one of six players to participate in weekly golf matches. He has received the Scholar-Athlete Award multiple times, which is awarded to students who play a sport while maintaining honor roll. Ben is the treasurer and vice president of Best Buddies. Students involved in Best Buddies work hand-in-hand with students with intellectual disabilities to promote inclusion in the community. He received the Best Buddies Award this year for demonstrating sincere care and compassion for Best Buddies. Ben is the co-founder of a nonprofit organization called Koats4Kids. He has collected over 500 winter coats to date for children in the foster care system. In his spare time, Ben has assisted a local food bank with preparation of raw products to be delivered to various food pantries in the local communities. Ben has been a classically trained pianist since the age of seven. He has volunteered over the years to play the piano for children and the elderly. In his spare time, Ben has worked at Suffield Country Club helping to maintain the golf course, and most recently worked as a Senior Golf Club Attendant. In the future Ben would like to become a secondary school teacher in History or Special Education and ultimately would like to be a high school principal.

Congratulations to Laila Lawson, who was chosen as the Rotary Student of the Month for October. Laila is a senior at Suffield High School who is a member of our National Honor Society. The three pillars of this group are “Character, Leadership and Community Service.” As a member in this group, she helped to collect items for the Toy Drive and volunteered for the volleyball marathon. She is also a member of our Interact Club and Giraffe Club, which are both community service clubs. Students perform community service within our town and the surrounding area. The motto of the Interact Club is “Service Above Self” and the motto of Giraffe Club is “Sticking your neck out to help others.” Laila has been part of our Wildcat Advisory Group (WAG) for several years. One of the main goals of this group is to help 8th graders experience a smooth transition into high school. In addition, WAG members help out at events like Open House and parent teacher conferences, helping parents navigate their way around the school Laila has been part of the girls soccer team and the girls tennis team since freshman year. she also participated in girls basketball and indoor track. She has been recognized as a “Scholar Athlete” several times throughout high school, which means achieving honor roll while playing a sport. She participates in our Science and Engineering Fair, earning Third Honors in 2017, Second Honors in 2018 and Third Honors in 2020. Over the years, Laila has received Core Value Awards for exemplary demonstration of “Integrity” in 2017 and “Respect” in 2018. She challenges herself by taking Honors and AP level classes. She has travelled to the Dominican Republic to do humanitarian work in local villages. Before the trip, Laila and a friend held a fundraiser at school to raise funds for school supplies that would be used there. In addition, she also helped to organize an Australian Wildlife Fundraiser to help rebuild the lost homes of people and animals in Australia. She has also volunteered at Vacation Bible School at her church for several years. Laila has been part of Chick-Fil-A Leadership Academy, as well as Best Buddies.

Both Ben and Laila are both very deserving of the honor of “Rotary Student of the Month!”