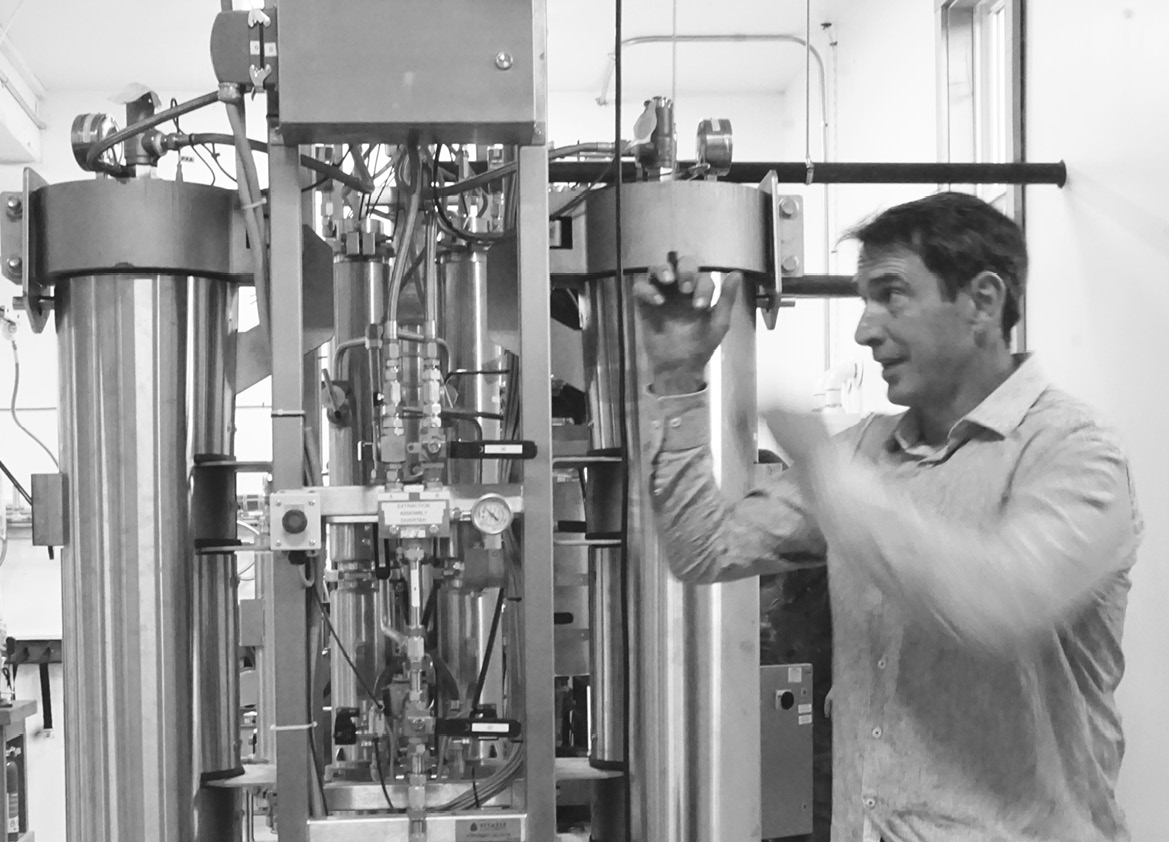 In his usual animated style, entrepreneur Rick Sotil explains the operation of the primary unit in the hemp processing CBD plant he has assembled in an old tobacco warehouse on South Grand Street.

On November 14, when Governor Ned Lamont signed a significant new bill that had been approved by both houses of the state legislature in September, he brought his entourage to an old tobacco warehouse on South Grand Street for the ceremony. The bill, the first in the country, brings Connecticut state regulations concerning hemp growing and processing into compliance with federal law.

Governor Lamont came to Suffield to celebrate the event in the hemp processing plant that Rick Sotil has put together here. Rick, an enterprising local personage best known in the local area for his tree service business, is now processing hemp into CBD oil in a business he calls Lasa Extract.

At the signing, State Agriculture Commissioner Bryan Hurlburt called hemp “the future of Connecticut agriculture,” according to an article in the Journal Inquirer. Sotil plans that his processing plant will not only be a successful business but will be an educational center for other entrepreneurs as well.

Hemp, also known as cannabis sativa or marijuana, is a variety of marijuana different from the illegal variety, a difference something like the difference between broadleaf and shade tobacco. Hemp is commonly used for making Manila rope, paper, textiles, and some food products. It was only two years ago that Congress voted to take hemp off the controlled substance list. It can now be grown and processed legally to produce cannabidiol (CBD), which is believed to have health benefits and lacks the tetrahydrocannabinol that produces the hallucinogenic effects of “weed.”

In the South Grand Street plant, chopped-up hemp is put through carefully controlled procedures that extract the CBD and combine it with selected vegetable oils for convenient use. One small bottle of Lasa CBD Oil that Sotil showed this reporter came with an eyedropper in the lid, used to put a drop or two on one’s tongue. Another eyedropper bottle was labeled for use with cats or dogs for its calming effect. He said that Lasa meant “be calm,” in the language of his Basque ancestral heritage.

During this reporter’s visit, Rick’s wife, Valentina, who functions as operations manager, was working with an aide preparing photos for marketing publicity. Nate Huff, laboratory manager, was tending to some impressive chemical measuring equipment.

Rick, who lives in East Granby, came to the local area decades ago during an active and multi-faceted career. Son of a jai alai pioneer, Rick was baptized in a jai alai cesta and grew up in Trumbull, Conn. Using the name Lasa, he became an internationally successful professional athlete and won a jai alai world championship twice. From 1982 to 1995, he was a stand-out player at the Hartford jai alai fronton, where he became a labor organizer and served as president of the International Jai Alai Players Union.

Husband and father of four, Rick is also a serious and competent artist, a published author and aspiring screenwriter, as well as a part-time farmer. It was his tree service that brought him to Suffield, where he based that business in rented quarters in the old tobacco warehouse he now owns. During my visit there on December 4, he showed me the spaces where his CBD plant could be expanded, as well as the large bales of hemp awaiting processing. So far, he has acquired the crop from a farm in Simsbury and another in South Windsor.