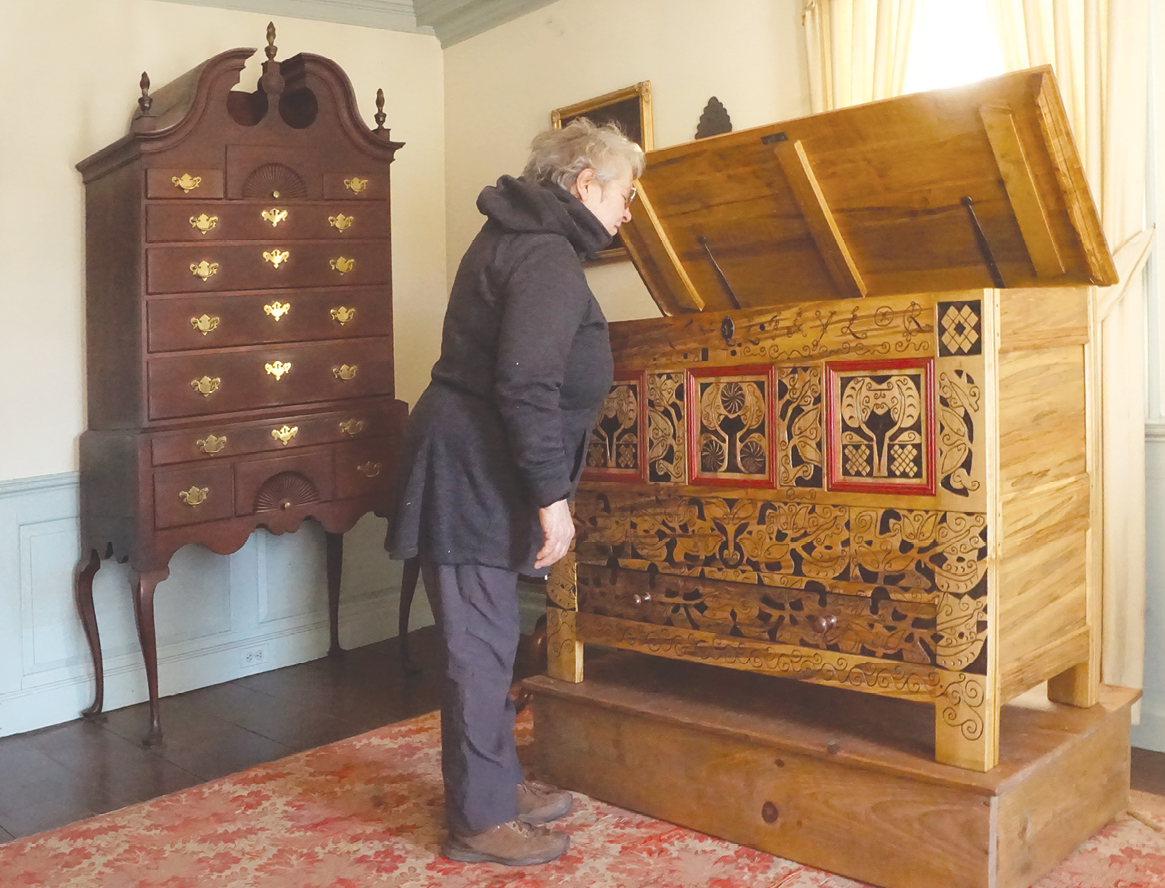 Author Jackie Hemond examines the interior of the Hadley Chest replica made by Suffield’s multi-skilled craftsman Jim Kent. The impressive chest, on exhibit in the parlor of the King House Museum, is a careful copy of the 1708 original, which was destroyed in the 1983 King House fire. The museum hopes to reopen to the public in May, with pandemic precautions.

A Hadley chest is presently on display at the King House Museum, which is expected to open in May. It is not an antique. Created by Jim Kent, it is a copy of a Hadley chest the King House once owned. Unfortunately, the original was burned so badly in the December 30, 1983, fire at the House that it could not be repaired.

Hadley chests are unique to the Connecticut River Valley, made specifically in the fifty-mile stretch from the Vermont/Massachusetts border to Suffield from about 1680 to 1740. The Wadsworth Atheneum owns several, one probably made in Suffield in 1730. The term, “Hadley Chest” was coined in 1883 by Henry Wood Erving, an early Americana collector, when he discovered an example in a Hadley, Mass., home.

The chests are easy to identify. They are heavy, wide-board chests, hinged to open on top to a deep storage area used for blankets, linens, or clothing. The front of the chest generally has one to three drawers. Most every house owned a “blanket box” but the Hadley chests were “built like a house” by a carpenter, known as a joiner, using mortise and tenon joints. Front panels were carved in a low relief design and painted, often with flowers (generally tulips), leaves, and sometimes, the name or initials of the intended owner with dates. Some were colorful, painted in Prussian blue, deep red and black.

Similarly carved furniture, but in a more intricate style, were made in northern England, near Lancashire and southern Yorkshire. The Hadley chests of the Pynchon family of Springfield were slightly different. They sported turned half-spindles, molding and carved diamonds. In the Hartford area, chests much like the Hadley chests displayed a sunflower motif instead of tulip.

It is surmised that 500 to 600 Hadley chests were produced. The identities of the woodworkers who made the chests are mostly unknown. The templates and method of construction passed through several generations of apprentices and family workshops.

The chest owned by the King House was discussed in Charles S. Bissell’s 1956 book, Antique Furniture in Suffield, Connecticut, 1670-1835. It was also illustrated in Colonial Furniture in America by Luke Vincent Lockwood.

It was made for Thankfull Taylor, from Hadley, who married Nathaniel Warner of Suffield on May 10, 1710. He came from the family for whom Warnertown Road is named. The artisan of the chest is believed to have been John Taylor, Thankfull’s father, who was a cabinet maker. Carved into the wood in such fanciful type that it is almost illegible, is her name and February 18, 1701, possibly the date of her twenty-first birthday. She was born in 1680.

The chest was purchased in 1899 by W.J. Hickmott from Thankfull’s great, great grandson, Frances S. Remington of Suffield. Hickmott’s son, W.J. Hickmott, Jr., donated the chest by bequest to the King House Museum in 1952.

In 2016, at New York’s Americana Week auction, a Hadley chest was sold. It was the most expensive piece of furniture that week, fetching just over one million dollars. Many museums include a Hadley chest in their collection including the Henry Ford Greenfield Museum in Detroit, The Winterthur in Delaware, Historic Deerfield, and the Museum of Fine Arts in Boston.

Next Article
Senior Center & Mini Bus News
Here we go! We are going to begin the gradual opening of…