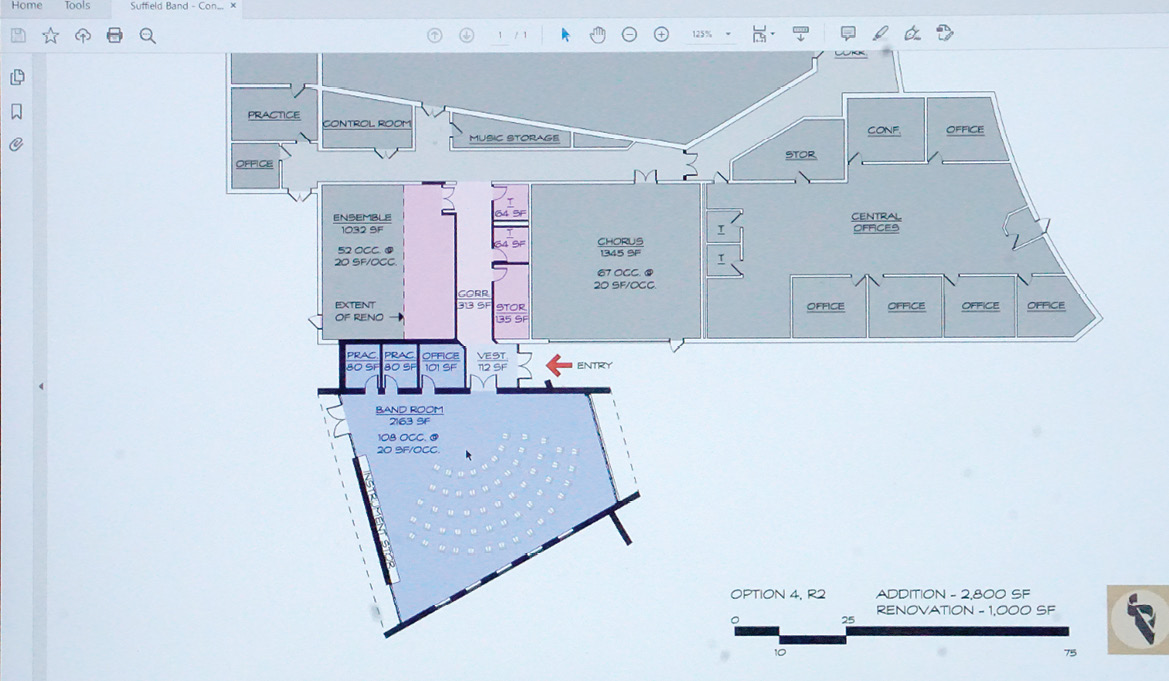 The new band room being considered at Suffield Middle School appears in blue at the bottom of this early sketch. It would be a small addition to the building, attached to the south-west corner of the school, behind the school superintendent’s office suite.

For several years there has been talk of expanding the music rooms at Suffield Middle School, especially to provide better space for the band to practice. Interest in music as an extra-curricular activity has increased tremendously in recent years, particularly in band. The SMS band has had to hold some practice sessions in standard classrooms, which are cramped and, with no acoustic treatment, include sound levels approaching or exceeding dangerous intensity. The matter has been discussed by the Board of Education and the selectmen.

Separately, First Selectmen Melissa Mack has been planning a long-range facilities study for the town, with consideration of what major building investments may be needed and how they could be phased to even out the Town’s bonding expense. Any school expansion would be part of that study.

Recognizing that there has been no significant expansion to Suffield school facilities since the new high school was opened in 2002, and knowing that a good school music program can be an attractive element for potential newcomers to town, the BOE approved some preliminary studies of what might be built to alleviate the middle school band problem. It might even be built separately from the facilities study, with help from grants.

The resulting suggestion, pictured above would attach a new room to the southwest corner of the school building for band practice, behind the offices of the Suffield school administration and the superintendent. The space of the present, cramped, band room in that corner would accommodate a short corridor to the new room, along with storage space and restrooms. The remaining old space there is labeled “Ensemble” in the drawing.