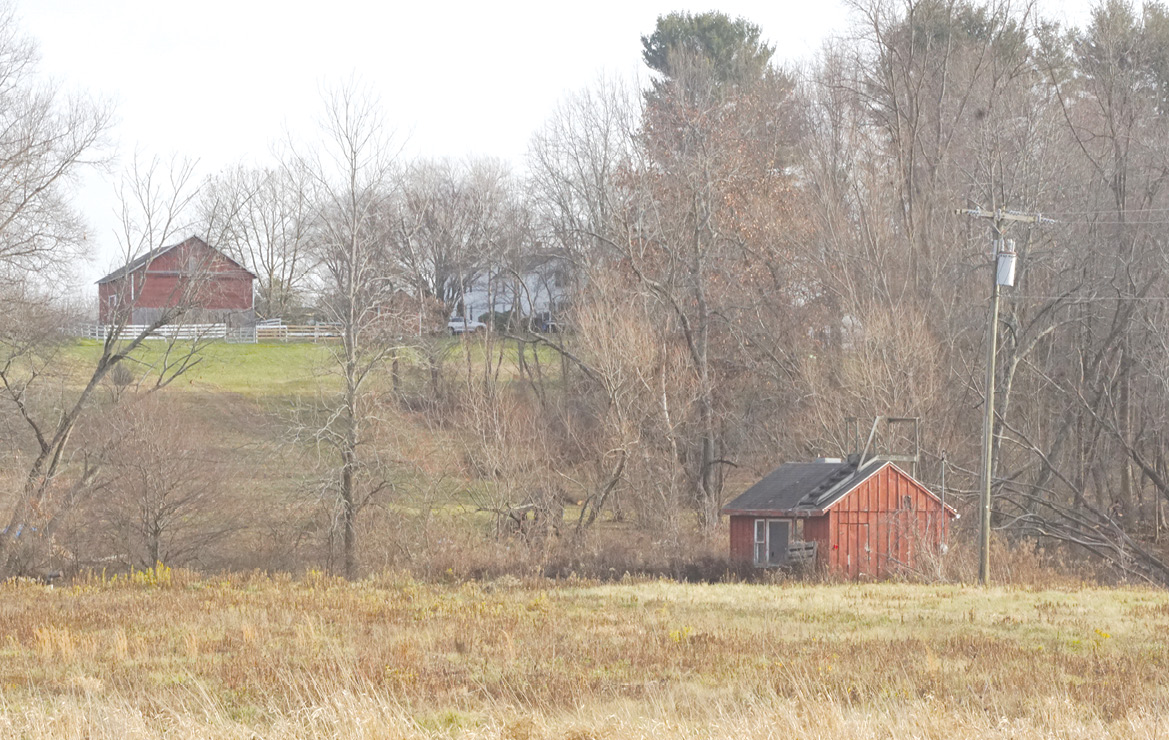 This former Baker Nursery property at the end of Poole Road is to be the site of new greenhouses for growing vegetables hydroponically. One of Baker’s old pump houses is seen here in December. The foreground field was once full of hoop houses.

It was a number of years ago that Robert Baker, who started Baker Nurseries in 1956, began to end production on various parcels of land in Suffield. The business had grown nationally, with divisions in several states across the country. In Suffield, his most well-known locations have been on Mountain Road, one across from the West Suffield post office, at No.1320; the other a bit west of that, at No. 1700. A large tract was at the end of Poole Road, extending west to Taintor Street. The business also had stock growing on other Baker land around town. But in recent decades, various Baker parcels in Suffield were left fallow, and many hoop houses have been dismantled.

Two large parcels have been sold recently. In 2017 it was announced that Four Season Farm of Wallingford, a newly organized greenhouse developer and operator, planned to buy a large part of the Baker property on Poole Road. There they would erect large greenhouses and grow vegetables hydroponically. As described in 2017, they would start with a 10-acre greenhouse plot and expand to 43 acres. The plants would be grown vertically, for efficient use of the space and easier harvesting, with fertilizer delivered by recirculated water. Tomatoes were announced as the first crop, in a seasonal operation that wouldn’t compete with local produce grown in the summer. Governor Malloy announced that the Connecticut Department of Economic Development would provide $3 million in support for the project.

Unfortunately, Four Seasons was unable to buy the Poole Road property in 2017, but a deal for over 60 acres was consummated recently in November. The state support is still in place, and the previous Suffield Zoning approval was reaffirmed. That approval included various restrictions defined after public complaints were voiced at a public hearing.

The rows of old hoop houses on the property had been removed by Baker, leaving only a few barns and pump houses. At this writing, there has been no new activity there. The Observer has been unable to reach Joe Geremia, who helped us report on his plans in 2017, but the late Robert Baker’s son Dale Baker said he thought Geremia would probably start building his first greenhouse in Suffield this summer.

Almost 100 acres of the Baker property at 1700 Mountain Road were purchased in November and December by the Sellew family, which operates Prides Corner Farms, a nursery headquartered in Lebanon, Conn., which also sells from a wholesale yard in Cromwell. They also do landscape and garden design, servicing a large region of the Northeast. The business was established in 1979.

Mark Sellew explained that they offer container-grown bushes, ornamental trees, perennial flowers and grasses in well-known brands. With Baker’s cooperation, the company began work at the Mountain Road site, even before the sales were signed. So far, they have updated the office buildings there and constructed at least one large hoop house, which is now operating. Hundreds of hoop house skeletons await their plastic covers.

There was no public comment at the Planning and Zoning Commission meeting that approved this land sale.

Next Article
Resilience Pays Off
They say a cat has nine lives; Suffield resident Cydonie Brown has…