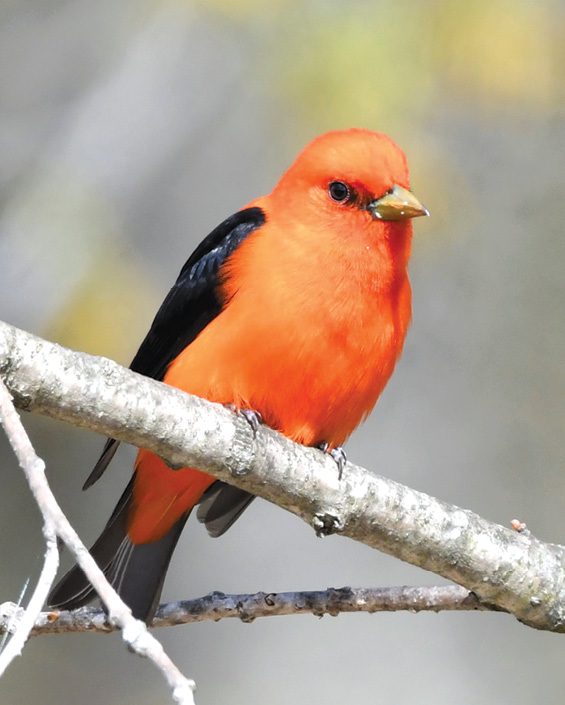 If you happen to hear a chick-burr call when in the woods, look up and you may be rewarded with a glimpse of this brilliant red bird flying high in the canopy.

I know exactly where I was when I saw my first scarlet tanager. I had been visiting my grandmother in Glastonbury and had spent the day exploring the brook and the ruins of the old gunpowder mill which was later used to process cotton, both around the corner from her house. No one was worried that some crumbling wall would give way and clonk me on the head, or that I would get whisked downstream never to be heard from again as I navigated the slippery rocks. I climbed up the banks of the brook, thinking I could definitely go for a piece of my grandmother’s fudge, and there in the maple tree sat the tanager. I held my breath. I knew it only from the pages of my Roger Tory Peterson guide, but there was no mistaking such a striking bird. Eventually I needed to take a breath, and eventually he flew. But the image has stayed with me for a long, long, time.

These days my birding group heads out, and our eyes are peeled for the migratory birds who have spent their winters down south and are now back. The tanager is one of those birds. He has a lyrical song but likes to taunt us with that song from the canopies so we have chronic stiff necks from gazing towards the heavens. But man, when we do catch a glimpse, it is well worth it. The males are a shocking red with jet black wings and tail, the female is yellowish green. They sing as they pair up and establish their territories. Then the female gathers a few sticks as she constructs a makeshift nest in a suitable tree, where she lays two to five eggs. The tanager’s eggs are all in one basket, as they say, since they only raise one brood each year. Both parents feed the offspring until they are ready to take flight. Once the young have fledged, the mature adults spend their time feeding on insects and berries, and by fall, the male has traded his scarlet ensemble for a more drab outfit as they prepare to head south for the winter.

Around here, we head up to the New England Trail, as we have had good luck seeing the tanagers way up high in the oak trees. They like big stretches of forest so this seems like a good spot, and often it is. More recently we took to the “grasslands”, the wildlife management area near Babbs on the Suffield/ Southwick line. Clutching our binoculars, we zoomed in on several tanagers near the wooded edges there. We stood in awe of these birds, while Mary Oliver’s words circled around in my head. We held our breath “to stop time when something wonderful has touched us.” The tanagers acted nonchalant and busied themselves with feeding but allowed us to share their space for the morning. We were light on our feet as we headed home. Now I am hanging on to the vision of their scarlet plumage, already dreading their departure for South America this fall. I have read that they can winter as far south as Bolivia. Bolivia!

So now not only do I have this bird on my mind, but I also have the entire Butch Cassidy and the Sundance Kid movie scrolling around in my head, since Bolivia was their end game. Back in the day, Bolivia seemed the most romantic locale on the planet: mountains, deserts, rainforest, volcanos, salt flats and, of course, Paul Newman and Robert Redford. What’s not to love about their shenanigans with Katherine Ross on a rickety old bike, and the classic love triangle where dialogue was parsed, and less is more.  Be still my heart! Bolivia got under their skin and called their names and seemed like a good place to touch down, especially for a bunch of bank robbers running from the law. In Bolivia their marathon became a sprint, and their reputations stood the test of time. Aptly, one of Butch’s sidekicks uttered the line, “When you live 10 years alone in Bolivia, you get colorful.” That’s true for Butch and Sundance, and holds true for our tanagers. Colorful seems like an understatement. Maybe I’ll book a flight so I can see for myself.

Next Article
Blossoms Face in the Sun
Beautiful Pansies