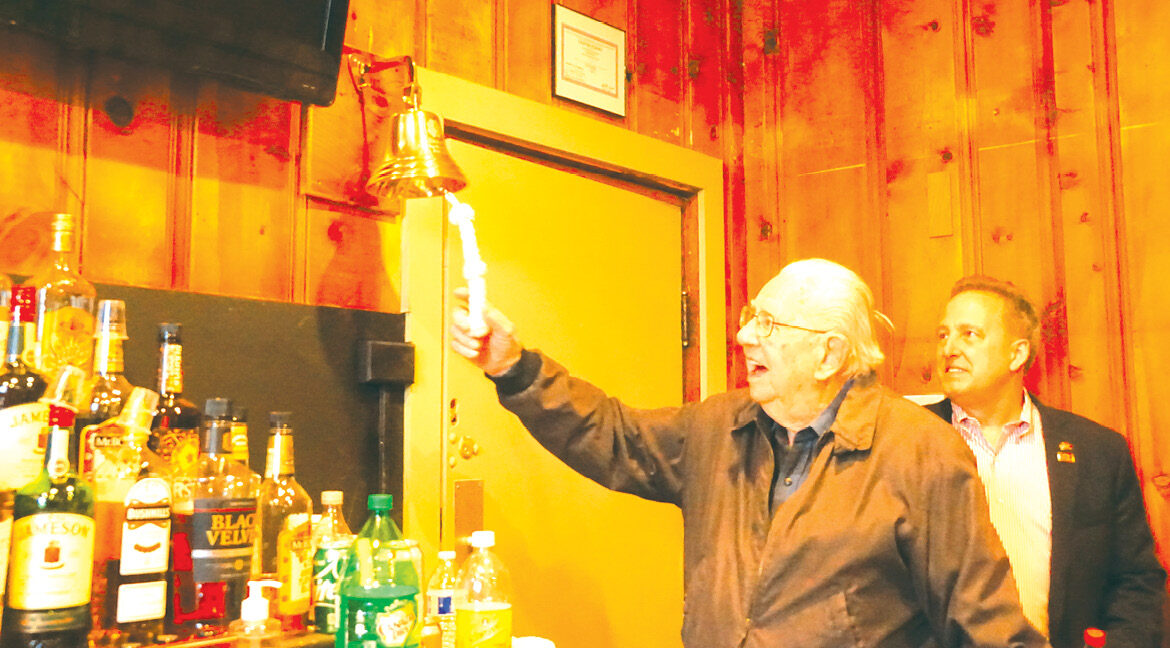 Duke Suzenski rings the bell signifying that the ceremony is over, the bar is now open. The March 20 ceremony, led by VFW Post Commander Bill Moryto, at the right, was held to honor Duke and rename the bar “Duke’s Canteen.”

Landry-Sic VFW Post 9544 on Sheldon Street, closed for a long period because of the COVID-19 pandemic, reopened in March, and on March 20 a special ceremony was held. A dozen and a half hard-working volunteers had labored hard for several months, not only to clean up the dust and debris that accumulates in a closed building, but to make some long-needed repairs and freshening. The reopening revealed a bright and improved lower level to the crowd attending the ceremony.

The Post’s new commander,  Lt. Col. Bill Moryto, USMC Ret., had conspired with other leaders to honor a long-term member, Ed “Duke” Suzenski, whose 100th birthday was approaching. Duke was surprised when he drove himself to the event and found such a big gathering of friends present. And at the end of the ceremonies, when he was asked to pull off the sheet covering a new sign on the wall of the freshened room, he was even more surprised. In big, decorative letters, the sign read, “Duke’s Canteen.”

Commander Moryto, First Selectman Melissa Mack, Rep. Tami Zawistowski, and others all had things to say in Duke’s honor. But a framed plaque on the wall said it best: “His vision and leadership has provided the Landry-Sic Post with a consistent roadmap for success; supporting veterans’ causes, community involvement and the occasional unlawful disturbance. Duke’s vibrant personality and natural gift to lead and inspire solid citizenship, true patriotism, support for his fellow veterans and citizens of our community are in keeping with the highest traditions of our armed services. Duke is much-loved and appreciated by the members and friends of the Post, by his family and friends, especially when he is buying the next round at the bar.”

Young Ed Suzenski of Suffield, born in 1921, had enlisted in the U.S. Marine Corps in 1939 and served throughout WW II, participating in combat for many months during the Pacific campaign, including several of the grueling island battles. Discharged as a sergeant after the war, he returned to Suffield, where he raised a family on Hale Street. He still lives in the family house. A long-term member of the VFW, he served there as bartender, trustee, post commander, and is now a life member.

Next Article
Moxy Boutique Returns to Suffield
Suffield residents can look forward to welcoming back a familiar friend, Moxy…