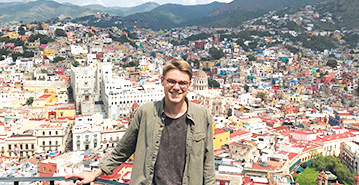 In 2019 during his Fulbright scholarship, Alex Voisine is pictured at a popular viewpoint in Guanajuato, an ancient city in the trans-Mexico volcanic belt.

Alex Voisine is a “local boy,” though no longer a boy and no longer local. He graduated from Suffield High School and went on to earn his B.A. from Temple University in Philadelphia in 2018, majoring in Spanish and Global Studies, with a minor in Latin American Studies. He has spent the last three years in Mexico City on a Fulbright Scholarship, earning a master’s degree in International Relations while conducting a research project having to do with the LGBTQ population in Mexico. He has also worked at the United Nations headquarters in Mexico City on the plight of refugees and exiles, forced by war and other violence in their home countries to seek asylum there.

In the twentieth and twenty-first centuries many Latin American countries have undergone extreme chaos, often having to do with dictatorial regimes and political revolution, to say nothing of the poverty, mistreatment and displacement, which are a result of such disorder. Alex mentioned Argentina, Chile and Brazil in this context, and most recently Venezuela, but the list is undoubtedly longer. Gang violence has increased, often leaving residents’ lives threatened and providing them with no alternative but to flee. There are echoes here of what we are seeing at our own southern border, or perhaps our troubles are echoes of what Mexico has been experiencing for decades.

In Latin America the LGBTQ population is even more at risk than others. Their life styles often draw attention from the so-called straight community, particularly in countries which are historically strongly Catholic. We have had a taste of that sort of thing in our own country, though perhaps not to the degree it exists in Latin America. This is a misunderstood and under-served segment of the population everywhere.

And what are the future plans for this young scholar? A Ph.D. of course, and as you can imagine, Alex has had excellent choices for the next step in his academic career. As a matter of fact, he has recently faced a happy dilemma: an offer from the University of Cambridge in England (all expenses paid for the duration of his studies) and the University of Texas, the leading American institution in the study of Latin American issues (also with all expenses paid). Although Cambridge has for centuries had exemplary high status among educational institutions, Alex ultimately chose Texas because of the leadership there in his area of interest. He will begin his work in Austin in late August and expects to spend five to seven years before his formal education is entirely complete. During that time he will also be teaching undergraduates.

And after that? Alex is pondering various avenues, but at this moment he is most fulfilled when working with students. He remembers the life-changing effect he experienced from teachers at Suffield High School: Stephen Schultis and, in particular, Magdalena Kruk. He credits them with attention and mentoring above and beyond their classroom duties and feels that without them his trajectory in life would have been far different. We don’t think often enough about the immense power that teachers can have on a young life; Alex would like to be part of such a profession. But that decision remains several years in the future; there are other options out there for him, probably multitudes.

In the meantime, Alex has thoroughly enjoyed the exciting and varied urban life offered by Mexico City, quite the opposite of the rural atmosphere here in Suffield. He enjoys coming home for visits, of course; everybody needs peace and quiet from time to time, and family ties will always be important. But for now he is exploring the possibilities that Austin will provide for the next several years and is looking forward to the intellectual stimulation he will enjoy at the University of Texas, but he will undoubtedly miss the big city opportunities he has been enjoying in Mexico.

Lest the reader think that Alex has shot like an arrow on a straight path toward this success, the fact is that he has been engaged in a plethora of other activities, each of which he mentioned casually, almost as an afterthought: studies abroad, awards that led to Latin American trips and projects in high school and undergraduate school, studies in climate change too many to mention here. This is a young man with unusual energy and initiative, and also with both intelligence and warmth. It’s easy to see that he could turn a college or university upside down! It’s clear even now that he would be an asset to any institution and a skillful teacher for some lucky students somewhere. We will follow Alex’s career with interest, and feel pride in his accomplishments.