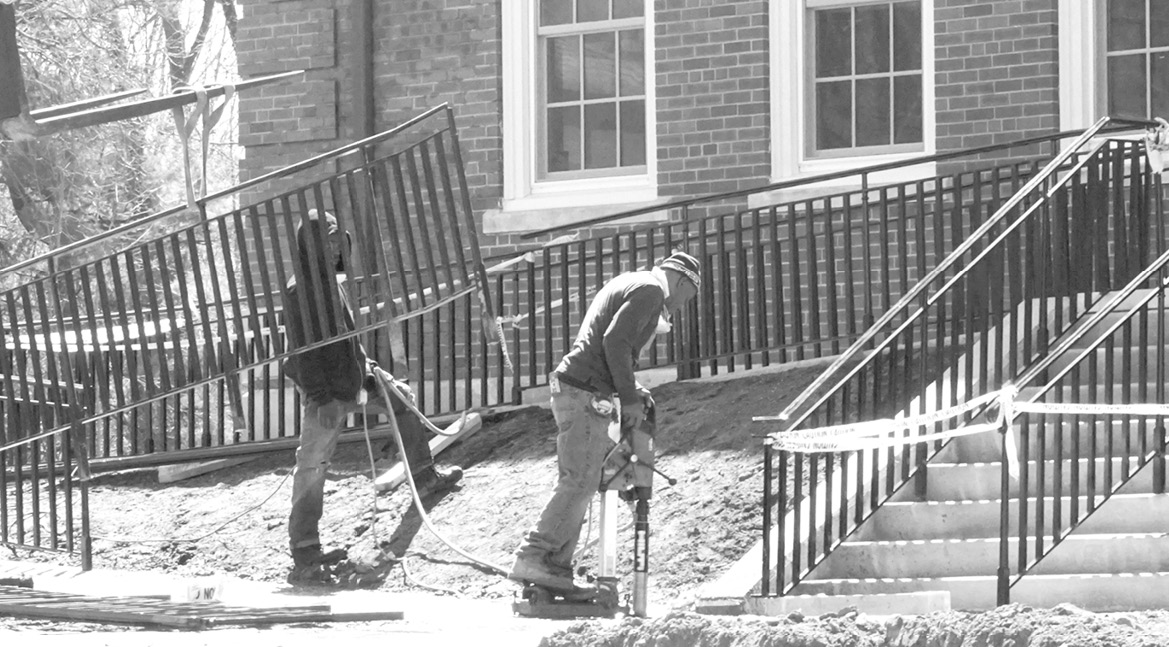 The railings for the Town Hall front steps and accessibility ramp were delivered on April 8. One of the supplier’s workmen is pictured trepan-drilling a socket hole in the concrete walk with the railing segment for that stretch hanging nearby. Other segments are set loosely in their sockets.

The last days of March and the first half of April have been moving days for Town departments.

The First Selectman and her assistants, along with Human Resources and the Building Inspector, moved into their new offices in the renovated Town Hall at the end of March. Following in April were the Tax Collector, the Registrars, the Town Clerk, the Assessor, the Finance Department, Planning & Zoning, and the Conservation consultant.

At press time, Chris Matejek, superintendent of facilities in the Public Works department, advised that he and Town Engineer Karen Isherwood expected to move later in April into the newly emptied Town Hall Annex. The earlier moves totally emptied the Town’s rented quarters at 61 Ffyler Place and partially evacuated 230C Mountain Road; the final move would complete the Town’s departure from 230C.

The Youth Services Officer and the Parks & Rec Department have been settled for several months in their new quarters in the Senior Center.

At the end of April, eight Town departments or functions will have returned to the Town Hall, five of them to the same or close to the same location as before. Two more are newcomers to the building. One formerly there is now elsewhere.

A number of final items in the Town Hall’s renovation project were reaching completion at press time. Two new windows were installed in the rear end of the large new meeting room on the right side of the first floor. Adjustments have been made to balance the HVAC system. A new walkway was laid from the meeting room fire escape to the building’s front sidewalk. The custom railings for the front steps and accessibility ramps were delivered on April 8, but their installation met with some problems. The provider’s crew worked on April 13 and returned on the 14th, but needed parts were not yet available. The crew turned to their remaining tasks on the fire escape. The rear parking lot and the driveways were all milled on April 14. New paving, including expanded parking by the Central Fire Station next door, which had been planned for the following day, was postponed by the forecast of bad weather. The status of several other items on the to-be-completed list is unknown.

The Town has announced a Town Hall Ribbon Cutting and Reopening, May 17 at 11  a.m.