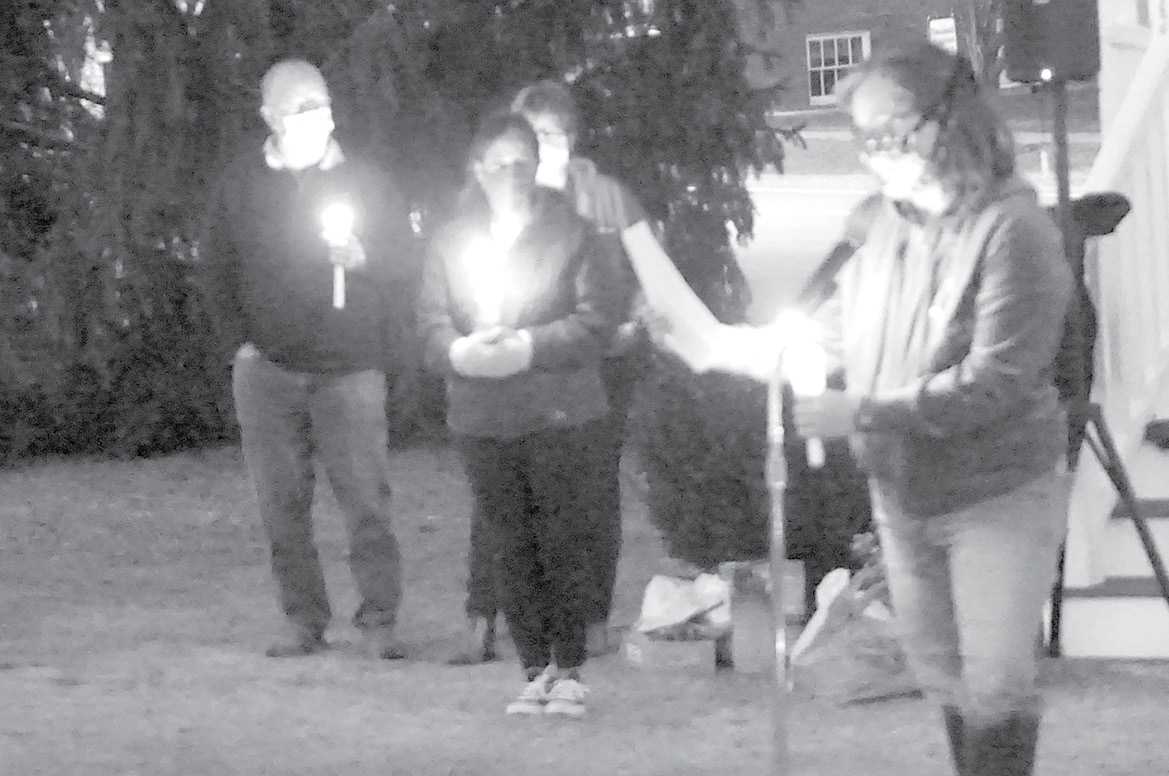 Suzanne Richardson-White, a member of Suffield ABAR, sings “Amazing Grace” during the March 20 vigil on the Green held in support of victims in the Atlanta shooting four days earlier. The event was sponsored jointly by ABAR Suffield and the Greater Suffield Interfaith Council.

In response to the mass shooting in Atlanta March 16 that killed eight spa workers, the Greater Suffield Interfaith Council, together with ABAR Suffield, quickly organized a candlelight vigil at the bandstand on Suffield Green. Over half a hundred attended the event, sharing the growing grief over such happenings, especially when the motivations are associated with racial bias. Three quarters of the victims were women of Asian descent. ABAR stands for Anti-Bias, Anti-Racism.

Leaders and supporters of the sponsoring organizations spoke or sang during the vigil, quite movingly. Amy Hawkins, one of the founders of ABAR Suffield opened, saying the vigil’s organizers “stand in solidarity with and support for our Asian-American Pacific Islander community.” She commented that “immediate responses to this tragedy by law enforcement, the mass media, and far too many people in leadership positions have been woefully insufficient.” And she added “tonight we pledge not only to remember, but to take action to make our world a better place.”

Dr. Kristina Hallett, another ABAR Suffield founder, continued: “We are gathered here today to honor and mourn our family. Because – make no mistake – we are family.” She said we must “broaden how we see and respond to race-based discrimination in our community and in our country” asking us all to make good on our pledge “to be better, do better, and take action.”

And Rev. Rachael Fisher, visiting from her church in North Reading, Mass., gave a unique description of the effect of racial bias, using the oddly-named poem that spread on the internet after Atlanta: “The Game Board: Second Generation Chinese American, female edition,” by Rev. Lauren Lisa Ng. The poem ingeniously builds on the metaphor of a board game as it tells how its author has become increasingly aware of the bias dangers she faces daily.

In about an hour, the evening had become almost fully dark, and Liz Warren, the third of the ABAR Suffield founders, closed with a strong final message, excerpted here: “To my Asian and Asian-American brothers and sisters, and to my students just down the street . . . I am so deeply sorry for the events that took place this past week, this past year, and for the past several decades in this country toward you and those you love the most. . . . Unfortunately, this violence toward Asian people is not new but is now more fully out in the open . . . The images I’ve seen over the past year have shaken me because they are all too familiar . . . What we’re seeing now is shaking the world the way George Floyd crying out for his mother shook the world. . . . To the Asian community, I see you, I feel you, I will grieve with you and I will most certainly stand with you. The Black community sees you, feels you, grieves with you and stands with you. Together, with our allies, we will heal with scars on our hearts that will never be taken away. But we can, and we will, work together to end racism and protect all of our people.”