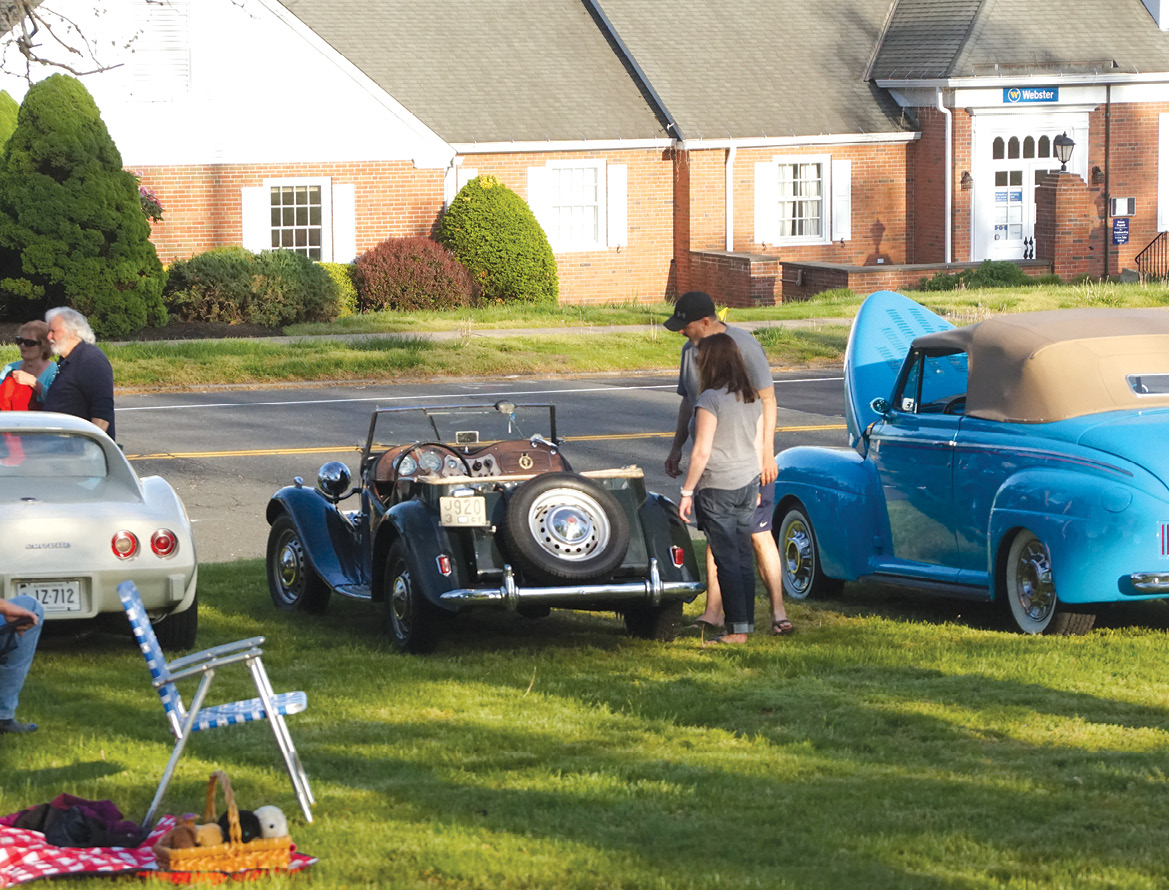 A couple admires a 1950s MG sports car in the classic car show.

In spite of a dubious forecast, May 15 opened with lovely weather and just got better all day. It was a perfect day for an enjoyable parade of events that hinted at an incipient emergence from the long pandemic shut-down.

The day started with the Suffield Garden Club’s May Market, in which entrance was controlled and departures were counted to limit attendance at 100. In addition to the happy return of the Garden Club’s plant sale booths, there were several other plant sellers along with a myriad assortment of other vendors happy for this opportunity, after last year’s May Market cancellation.

During the day some Suffieldians toured the 350th Committee’s “Barn Quilt Trail” organized with a list and map freshly available on line. It isn’t possible to tell how many took the opportunity to see them all.

Both the King House Museum and the Phelps-Hatheway House were open in the afternoon, and the Hatheway House’s Welcome Center offered the “Visions of Suffield” art show, available any time the house is open.

In the late afternoon, over 40 classic cars assembled for the Parks & Rec Department’s very successful show on the Center and North Greens and High Street, officially running from 6 to 8 p.m. The event was organized for Parks & Rec by Suffield Police Sgt. Justin Nelson.

And at that same time, Parks and Rec offered a concert near the south end of Center Green, with Pat Tobin and the Ron Poster Trio, a Boston area group. An audience of about 100, in widely scattered family clusters, enjoyed the concentration on Frank Sinatra offerings.

As the evening grew dark, Parks & Rec Director Peter Leclerc inflated the town’s new 25-foot projection screen just south of the bandstand, and family groups with kids settled in for the popular CGI animated movie, Cars. Because of the pandemic shut-down, the screen had been used only once before: facing the lake at Babb’s Beach in August 2019, with an audience in anchored and bow-beached boats on Middle Pond.

The whole day was very enjoyable for Suffield residents!