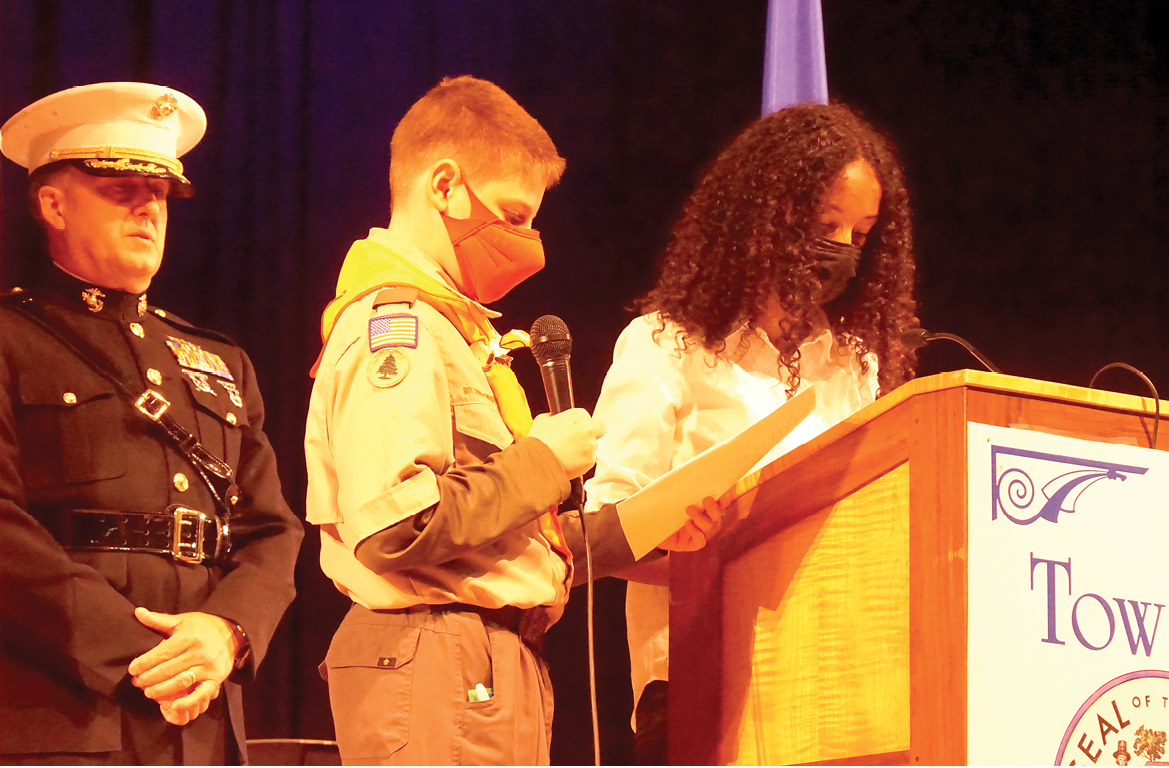 The customary parade on May 31, if it hadn’t been cancelled because of the weather, would have taken a new route: down North Main Street from Russell Avenue instead of up Mountain Road from Ffyler Place. The Town’s new Veterans’ Appreciation Committee, given the parade responsibility, had made the change, and many would-be participants agreed that it would have been a good change. Parking was to have been on Ffyler Place, with mini-bus and school bus transportation to Russell Avenue.

So Suffield’s traditional ceremony was held in the Suffield High School auditorium with an audience of about a hundred and Lt. Col. William Moryto, USMC, Ret., as officer of the day. A spirited prelude was offered by the high school band, whose percussion section’s interludes between the traditional themes of the several armed services were truly notable.

The Pledge of Allegiance was led by Girl Scouts of Troop 11963. First Selectman Melissa Mack opened the program, reminding us that the new Remington Street Bridge would be renamed and dedicated to Petty Officer Dustin Doyon, U. S. Navy, whose sacrifice at sea in 2017 was Suffield’s most recent military death. She also introduced Suffield’s new veterans’ representative, Gunnery Sgt. Frederick “Fritz” King, USMC Ret., who explained some of the duties of the Veterans Appreciation Committee, including setting out the Field of Flags in the future each year.

A Memorial Day prayer was read by Sgt. King, who is the chaplain of Suffield’s post of the Veterans of Foreign Wars, followed by the high school band playing “America.” Then the three traditional Memorial Day readings were presented: “In Flanders Field,” read by Abby Halasi-Kun, “Confession of National Faith,” by Jackson Heon, and Lincoln’s Gettysburg Address, by Laila Lawson.

Next Col. Moryto explained the symbolism of the small, empty table setting that had been placed in the auditorium’s cross aisle, representing Americans still missing from each of the armed forces – the MIA. He asked for a moment of silence to honor America’s prisoners of war, as well. Impressively, Col. Moryto read the numbers of those who have not come home to Suffield  from America’s wars, listing ten wars, with a total of almost 1.2 million.

Col. Moryto called attention to two other special names from the Roll Call: Seaman Second Class Frederick Joseph Landry and Private First Class Edward A. Sic., both casualties of World War II and both with their names on the Suffield VFW post. Landry was the first from Suffield to give his life in the Pacific theater of action of that war, and Sic was the first in the European theater.

The four men of the VFW Honor Guard marched outside through a door next to the stage and fired a memorial salute, followed by two high school buglers playing “Taps,” one on stage, the other echoing at a distance.

Sree Keerthi Manur sang “The Star Spangled Banner,” adding a rendition of “Amazing Grace,” as well – a surprising coda. Col. Moryto closed, asking everyone to remember our fallen servicemen as we enjoy the freedoms they died to protect.

Next Article
Blessing of the Bikes
For many years, my brother and motorcycle rider Dave Ledoux of Andover,…