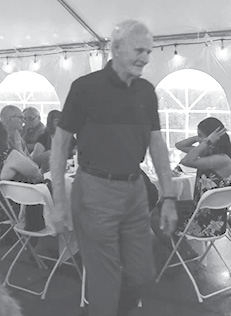 The appropriate theme for the evening, “Celebrating 45 years of service to the Town of Suffield,” was in place as the Suffield Volunteer Ambulance Association (SVAA) resumed its Annual Awards Dinner.

The ceremony began with Chief John Spencer, who became chief shortly before the pandemic began, admitting that he was not prepared for facing a world-wide pandemic. (Who would be?) He admitted he was nervous as daily news reports noted volunteer EMS services across the country had been forced to shut down as providers refused to answer COVID-19 calls. Like all similar facilities nationwide, there was the lack of necessary personal protective equipment. However, he noted, “…thanks to years of strong financial planning and a strong and vibrant roster of volunteers we were able to keep moving forward.” He thanked our volunteer college students who made the Zak Building a temporary home as they continued to answer calls. The Chief noted that notwithstanding the pandemic, the SVAA continued to implement planned changes, and since the fall of 2020 it welcomed 19 new members to the Association. SVAA is primarily staffed with volunteers, individuals who faced the same critical danger as all other healthcare workers being exposed to COVID-19 daily. Since the start of the pandemic, when other EMS services ceased to exist, and notwithstanding the risks, SVAA volunteers provided 23,000 hours of service.

As to the individual awards, two deserving individuals received Lifetime Achievement Awards, given to those who have shown an outstanding commitment and involvement with the Association and have given selflessly of themselves to the advancement of our service within the community. They must have dedicated at least 10 years of involvement with the SVAA with a measurable positive impact on the Association. One went to Pat Bland, who recently, after an approximate 20-year tenure, stepped down as the Director of the Board of Trustees, which plays a critical role in fundraising for the SVAA. Also receiving this award was Mark Jordan, a member for over 20 years who has made an impact on multiple members over the years. Popular with members because he is always there to offer a helping hand or share a joke to lighten the mood during sometimes difficult staff weekend shifts. During the past year he repeatedly volunteered for extra shifts. In addition to working a full-time job, he volunteers 36 hours on weekends. In 2020 he enhanced his skills and scope of practice, becoming one of only 13 AEMTs residing in Connecticut. Then, after a competitive process in which he excelled, he was promoted to Operations Lieutenant.

The Chris Schmeck Service Award is awarded to an individual who has consistently demonstrated performance to enhance the SVAA organization. This year’s award went to Bill Borchers. After Bill’s retirement from a distinguished professional career, he joined the SVAA Board of Directors where, among many accomplishments, he served a three-year term as president and chaired the Building Committee, overseeing the development of the Zak Ambulance Center. Bill has served as a driver trainer, acts as the Association’s Historian, inspects, and maintains the Town of Suffield’s AEDs located throughout town, and is active with the Association’s Strategic Planning workgroup. He embodies the spirit of volunteerism and has dedicated much of his life to this Association, mentoring countless members over the years and having made a long-lasting impact on many of those members.

The “Cardiac Save” honor recognizes the actions of those involved in the successful resuscitation of a patient suffering from Sudden Cardiac Arrest. In January 2020, EMTs Phillip Capell and Jackie Guzie, along with Suffield Police Officer Terry Antrum and Sargeant John Trovato, responded to a call. Arriving on scene they provided CPR and administered defibrillation via their AED. The crew, alongside a Suffield paramedic, provided aggressive treatment including a subsequent defibrillation and medication that resulted in the return of spontaneous circulation. After being transported to Baystate Medical Center, the patient, due to the quick action of those involved, was discharged with no known neurological deficits.

Those in attendance honored many individuals with long service, including Lisa Shelanskas, a volunteer with 35 years of service.

The Rising Star Award winner was Lila Dupui. The award honors the achievements of a new member who is quickly rising among the ranks and stands out among peers. This year’s recipient was one of the first new members brought in during the pandemic. Lila immediately showed incredible initiative, exemplified by her often showing up for training sessions even before she was cleared to ride as a trainee. She regularly attended training sessions, participated in community events and dependably rides two shifts a week as a newly cleared provider, always asking what she can do to help. She has absolutely shown the potential to be not only a strong member, but also a potential leader of future members.

This year’s Directors’ Awardee was Office Manager Jennifer Ferguson. Jenn rose above and beyond her duties in her everyday role. She has contributed her expertise and knowledge acting as the recorder for the Board of Directors and has offered input and advice into the Board’s processes as well as input into Association policies. She was an integral part of the Strategic Planning Process.

The SVAA and our town are lucky to have these individuals, and all the volunteers and employees who continue to work so hard, under dangerous conditions, serving the community as they have for 45 years.