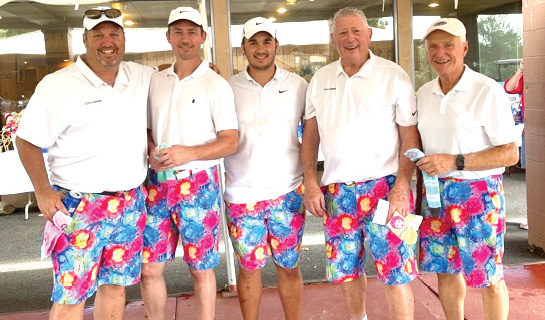 Although August 13 was a swelteringly 97 degree, hot and humid day, it did not spoil the 30th Annual Glenn T. Packard Memorial Golf Tournament sponsored by the Suffield Rotary at Oak Ridge Golf course in Agawam. 149 golfers honored the memory of Glenn and his father Warren, who passed away last winter. The tournament was started by Mark and Karlene Sullivan to create a foundation in Glenn’s name and to fund it with an annual golf tournament. Today they have been overwhelmed but delighted that the annual event has existed for thirty years.

Originally, the roster of players was at capacity, but one team had to withdraw due to COVID-19. Golfers came from Illinois, Missouri, Texas, South Carolina, Pennsylvania and as far away as Switzerland. There was added fun with prizes for the best dressed team and the person who was attired most like Warren Packard and his outfits for the tournament in past years, complete with argyle knickers and blue socks.

The proceeds from the tournament will once again benefit the Town of Suffield’s youth sports and adult programs and provide scholarships to local high school graduating seniors. It is a true testimony to Glenn that this tournament has lasted for thirty years, and plans are being made for the thirty-first one next August. With the permission of the Conservation Commission, to honor the memory of Glenn and Warren, two flowering crab apple trees are going to be planted in Stoney Brook Park by the Suffield Rotary Club.