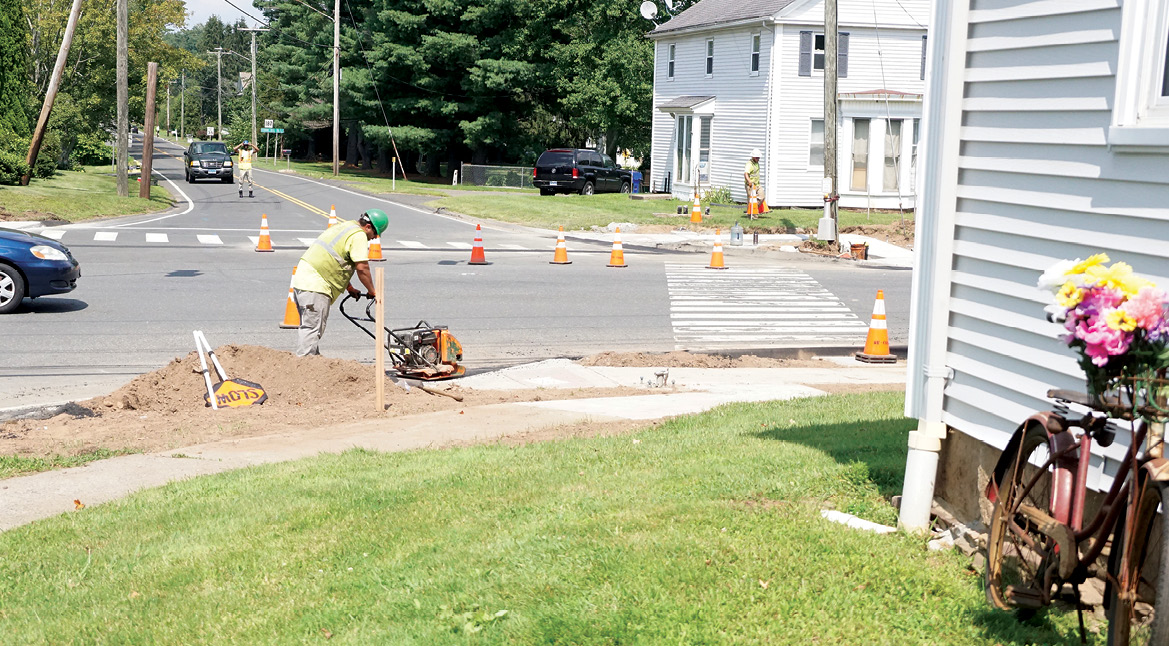 On August 6, a NY-CONN worker tamps down new pavement next to a section of a new sidewalk, leading to a new pedestrian crossing location at West Suffield Center, where the traffic controls are being updated in a ConnDOT contract. (At the right is the vintage bicycle and flowers Jim Sheridan has placed to enhance the antique appearance where he lives. The long-ago Terrett House hotel was converted into apartments several decades ago.)

Folks have wondered about the long delay in the Connecticut Department of Transportation’s traffic signal project in the Town Center. But now, the answer may apply to a second such project in town as well. The second project, begun in July, is at the West Suffield Center intersection, where the two parts of Grand Street jog a bit as they connect at Mountain Road.

On Main Street, the new signal lights at Mountain Road and Bridge Street have been waiting so long that their black plastic wraps have almost blown away. The Observer was told at first that the project’s completion awaited Eversource’s work making the final power connection. Now Leo Smith, an interested (and properly impatient in this matter) town observer, has shared Eversource’s response to his recent Freedom of Information request. It seems that the project has also been awaiting the delivery of the special-ordered “ornamental Pedestrian Pedestal poles.” Eversource said, “Material delivery has been a challenge on many of our projects . . . due to the pandemic.” They added that the estimated delivery date was early August.

As the Town Center Improvement Project some years ago included ornamental light poles and street name signs, one might assume that the “ornamental Pedestrian Pedestal poles” were intended to match their neighboring features.

The project in West Suffield Center is evidently a totally separate contract for the NY-CONN contractor doing both. Like the Town Center project, it will involve new signal lights and pedestrian crossing controls, and the zebra-striped crossings themselves are being somewhat relocated. Controlled crossings will be installed at three of the four possibilities, omitting the Mountain Road crossing at the west side of the intersection. New, short sidewalks are being installed to reach the crossing points. The new signals will all be suspended from one new diagonal cable (NE to SW) between new wooden posts, just as the present signals are hung, with no new steel towers.

The crew chief was not able to predict a completion date. One might assume that ornamental pedestal poles are not planned for West Suffield.

Next Article
New Eagle Flies on Town Hall
Early on the last Saturday of July, Art Diaz, president of Eagle…