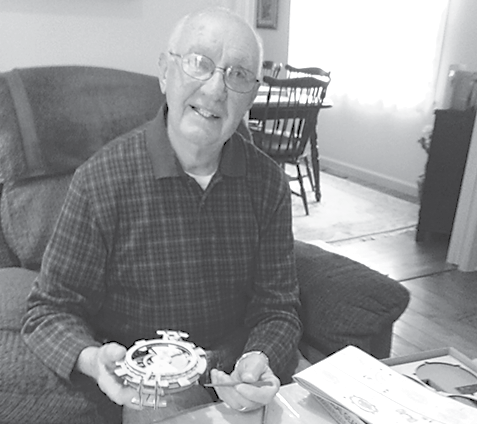 As a youngster, Peter Kulas wanted to know how things worked. In his neighborhood, Peter was known as Peter the Repairman. His family owned a restaurant, which is now Three Figs. At ten, Peter ran a repair shop in the back, fixing gadgets and toys while listening to baseball games on his crystal radio. He plastered the walls with WWII articles. From a carpenter, hired to build apartments upstairs, he learned carpentry. To buy tools, which he still owns, Peter unloaded grain bags from the freight train on Depot Street for five cents a bag. With them, he built a ten-foot rowboat he used on Muddy Brook. He made wooden models of WWII fighter planes and built a Navy Grumman F4F Wildcat cockpit which he pretended to fly.

His father, Bruno, opened a poolroom in the Barnett Building on Main Street, then moved it to the restaurant. His father set up a training room in the restaurant for boxer Buddy Brewster, who became the New England light heavy weight champion in 1938. Bruno was also a selectman and a postmaster , and he brought local big bands to Miller’s Beach dance hall on Lake Congamond, near current Sunset Drive. He was a fireman, showing Peter the burnt ruins of the icehouse at White’s Pond, now Sunrise Park.

Peter spent endless hours playing baseball in sandlot games and on organized teams. He learned from games his father umpired. The advice on schooling he received from his father was, “If you want to play baseball, you need to spend time at home doing homework.” On the school baseball team, he was known as the “Graceful Scoop.” At age fifteen, he was playing semi-professional baseball. In the summer of 1951, when he was 19, Peter tried out for the Chicago Cubs and the Boston Braves. The Cubs offered him a contract for its Appalachian State Rookie League, but the Korean War intervened. Peter joined the Navy instead. However, he made the starting line-up as a first baseman on the Navy baseball team.

In 60 games a year, from Cuba to New Jersey, Peter played against top-notch major league players. He picked off Willie Mays from first to second base, after Mays helped his team win the World Series. He also played with and against: Dick Groat, Vernon Law, Dave Sisler, Art Fowler, Sammy Calderone and Moe Drabowski. In reports sent to the Cubs, he was recognized for his outstanding fielding. His batting average was 259.

In 1953, Peter married Frances Dombrowski from Windsor Locks, whom he met while both worked at Kaman before the war. At first, Fran may have been wowed by his 1948 cream-colored Chevy convertible, but soon, they were inseparable. September marks their 68th wedding anniversary.

Peter left the Navy in 1955. The Cubs offered him a contract with its Morgantown, North Carolina, State League, a higher-level farm team than the Appalachian League. Peter declined the offer. He had a wife and a baby. He was done with playing baseball, although he coached for years afterward.

In the Navy, Peter was assigned to the Helicopter Test Group and later, directed flight crews on the US Ticonderoga aircraft carrier. At Kaman, an old-fashioned, small company with 27 employees, he had carved wooden helicopter rotor blades by hand. When Peter returned to Kaman, it was larger and subcontracting for the burgeoning aerospace industry. Parts were no longer made by hand. In 31 years at Kaman, Peter worked up to the position of Director of Manufacturing/Engineering in the Moosup and Bloomfield plants. He learned management skills and earned his MBA during 11 years of night school.

Peter accepted an offer to run Bonded Technology. After only ten years, he built it into a $13 million company, seven times larger than when it started. Less than a month after Alcoa bought Bonded Technology, the president of Sikorsky Aircraft asked Peter to direct a joint venture between Dow Chemical and United Technologies. Peter spent the next six years flying between plants in Connecticut and Alabama. At 65 ½, Peter retired. Thirty days later, the CEO of the company died in a plane crash and Peter was asked back. He declined. He was done with work.

Except for about 15 years, Peter has spent most of his life in Suffield, where he and Fran raised three children: Kenneth lives in Illinois, David lives in Glastonbury and Kathleen lives in Suffield. Paul, his twin brother, also lives in town. Peter approves of how the town officials have kept a strong handle on economic development, turning Suffield into a desirable town. He hopes that the townspeople can surmount present challenges and live harmoniously.