Contemplating their status at the end of the story in Mamma Mia are three and a half couples whose situations fueled this entertaining musical production. From the left, Donna and Sam, who had reunited; Sky and Stella, the wedding couple who had decided to stay together, unwed; Rosie, who managed to connect with Bill, another of Donna’s former lovers; and Harry, who surprised everyone when he explained that his lover now – who hadn’t come to the island – was Nigel. Rosie (Tabatha Hinkle) is dressed in the extravagant Abba-style garb of the girl group she used to share with Donna. 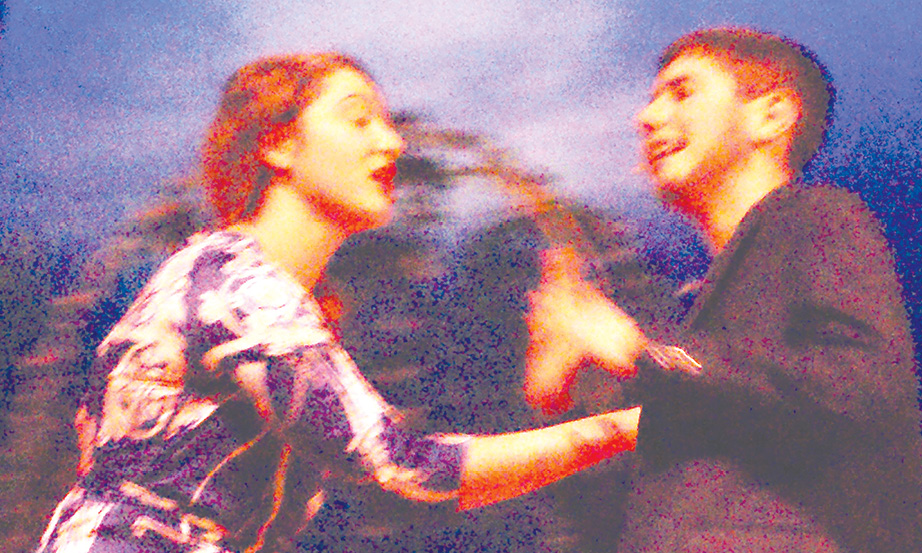 Shortly before the wedding, Rosie, one of the Dynamics, pursues Donna’s former lover Bill, singing, “Take a Chance on Me!”

Early in the story, Sophie sings of her dream that she’ll be walked down the aisle by her father at her impending wedding, but she doesn’t know who he is. 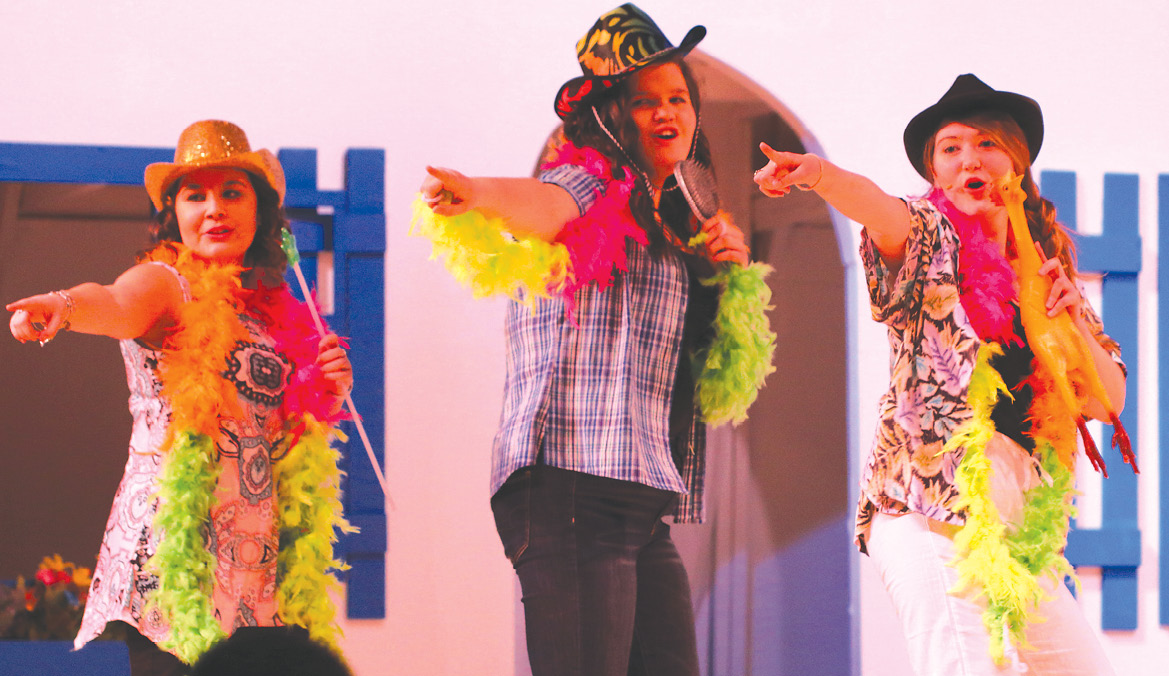 Kate, center, and two old friends don leis and reprise “Dancing Queen” from their former group, Donna and the Dynamics.

After learning that they had each been invited to the wedding, Donna’s three former lovers reminisce about old times, with Harry on an old guitar he had found. From the left, Bill, Sam and Harry.

Excellent voices, great dancing, an impressive set, enjoyable music by an immensely popular group, and a hilarious story of modern life in an attractive Mediterranean location — what more could an audience want, especially those in the audience whose kids were on stage. There was enthusiastic applause and much laughter for the Suffield High School Drama Club’s March 14 initial performance of Mamma Mia, the long-running musical dramedy by the popular Swedish group Abba, featuring their 1975 music.

Sophie has secretly invited three of her mother’s former lovers to her wedding on a Greek island where her mother runs a tavern, hoping she can learn which of them is her father, something even her mother, Donna, hasn’t figured out. It’s a situation that leads to lots of serious and hilarious discoveries but ends up happily for everyone.

Michaela Conway and Madison Zielinski, as Sophie and Donna, carried their demanding roles well, musically and dramatically. Ben Grigoriou, Jack Burke, and Jack Flanagan, as Sam, Bill, and Harry, the former lovers, did similarly well, especially Grigoriou’s beautiful singing. Burke added nicely to the comedy, and Flanagan showed good command of stage action and expression. Many others contributed importantly on stage to the success of this production and populated the large entourage of friends and townspeople who provided fine choral support and well-trained dance numbers — including what seems to the obligatory cartwheel or two.

“Mamma Mia,” by the way, was Donna’s surprised response when she discovered that her ex-lovers had arrived for her daughter’s wedding.