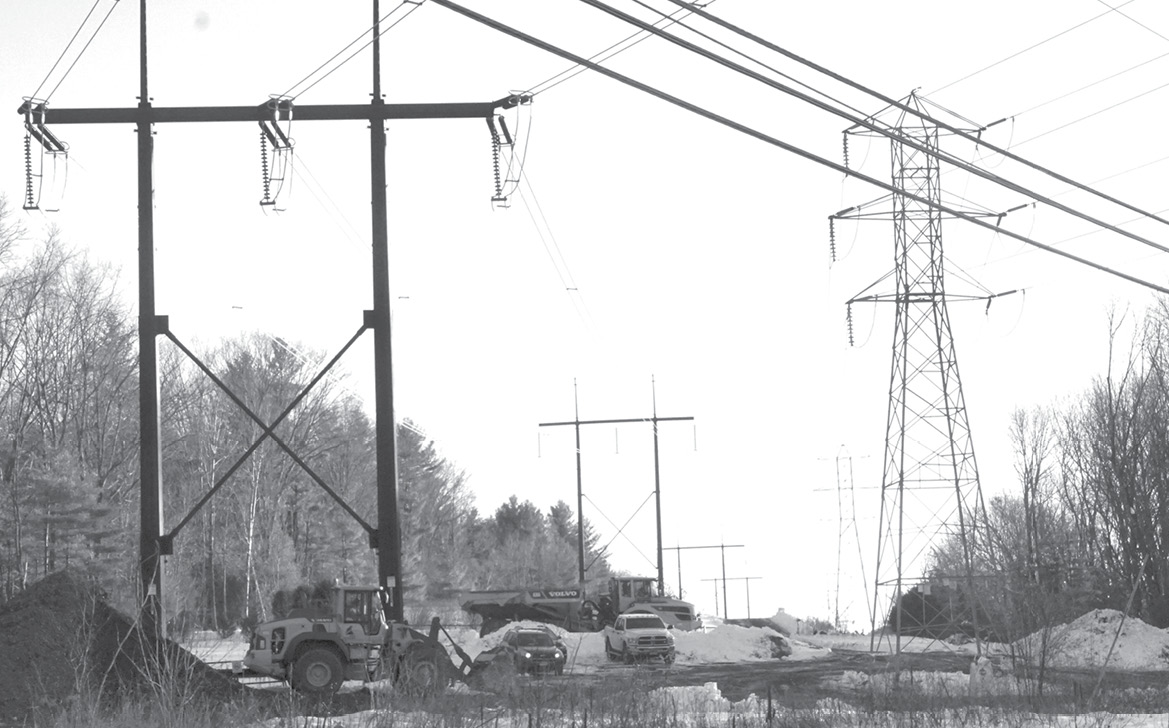 The new power line crossing West Suffield, completed in 2013, and the old lattice tower line alongside from the 1930s are shown on February 4, viewed looking south from their Phelps Road crossing. An initial construction crew had recently begun the task of improving the access roads along the right-of-way and preparing the work sites for replacing the old line.

Remember the big project in 2012, when Eversource built a new, very high voltage power line next to the old line across West Suffield they had installed in the 1930s? The new project was completed in early 2013. Now Eversource is embarked on a new project, replacing all the lattice towers of the old line with new monopoles and new wires.

Letters went out to 85 affected property owners in spring, 2020, but unlike in the years preceding the 2012 construction, there has been little other publicity. Eversource briefed Suffield officials in May 2020, just as the town was being shut down in response to the COVID-19 pandemic, so a public meeting was out of the question. After a public briefing in 2009, the earlier project had met considerable opposition from residents, principally concerning presumed health effects from the 145 kilovolts of the proposed line and the potential “disastrous” effects on property values. There has been little talk since.

Briefing material on the present project shows that the line being replaced extends seven miles from a junction in East Granby just south of Turkey Hills Road (Route 20) to just across the Agawam line east of Ratley Road in Suffield. Four and a half miles of the line are in West Suffield, with 45 poles there.

The lattice towers will be replaced by taller “weathering steel” monopoles. Two arms on one side and one on the other will each support a single, thicker wire carrying the 115-kilovolt three-phase power, replacing the wire pairs of the old towers. A new fiber-optic ground cable at the top will serve as a communications link between Eversource sub-stations.

The new towers will be set along the old center line adjacent to the old ones, which are spaced generally 400 to 700 feet apart, varying according to the terrain at each site. (The span across Mountain Road by the Suffield landfill is over a quarter-mile long.)

Construction work began at the end of 2020 when road contractors began work on gravel access roads, timber mats over wetlands, and work space at the tower sites. Only a modest amount of tree removal has been required. Completion is expected by the end of the year.